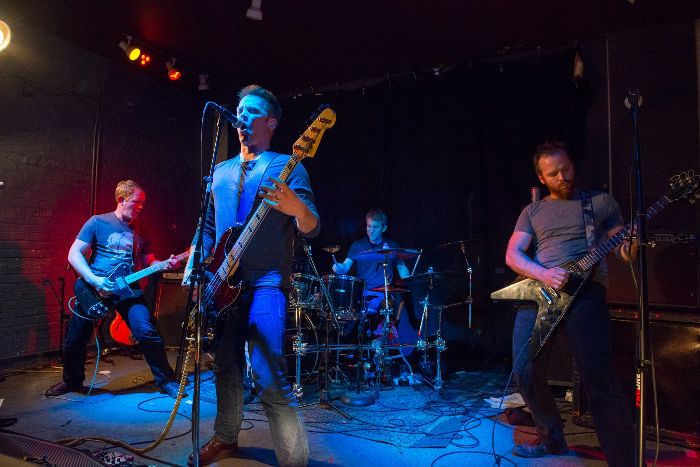 Chicago’s Arriver have just released a video for their cover of “Holy Glow,” a song that was originally done by The Ophelias. The single will be released on all streaming platforms tomorrow.

While Arriver’s 2007 debut Vanlandingham and Zone extrapolated a scrap of bot-generated doggerel into a sci-fantasy epic reminiscent of Heavy Metal magazine’s glory days, 2012’s Tsushima redirected their creative fervor into album-length historical narrative, footnotes and all. 2016’s Emeritus expanded that thesis as a magical-realist retelling of the Chernobyl event, refined to radiant purity in a monumental, near-linear 13-minute title track.

Throughout the narrative frameworks upon which Arriver builds, prevailing themes emerge: the struggle to maintain humanity under dehumanizing conditions, fanaticism in collision with brutal reality, free will in defiance of fate. With these ideas at a boil amid the upheavals of an ever more dystopian present the band returned to fiction, rejoining the struggle of Vanlandingham and Zone’s iconoclastic anti-hero. Recording began, and then…

Separated from each other and from the studio but sustained by the DIY ethos that animated from the start, Arriver resolved to complete something that could stand alone. From basic tracks captured on their most recent venture to Electrical Audio with Greg Norman at the helm, completed in isolation with available resources at home, and ably mixed by Sanford Parker, Arriver presents the single “Holy Glow.”

“Holy Glow” covers The Ophelias, a deep-underground Bay-area psychedelic group active in the mid-late 1980s. Like Arriver, The Ophelias assembled a wild assortment of crosscurrents: Bolan-esque whimsy, Queen’s theatricality, the lysergic folk ramblings of The Incredible String Band, mythology and occultism. Arriver’s version of this strange incantation exits the sonic language of metal entirely yet remains subtly and profoundly heavy.