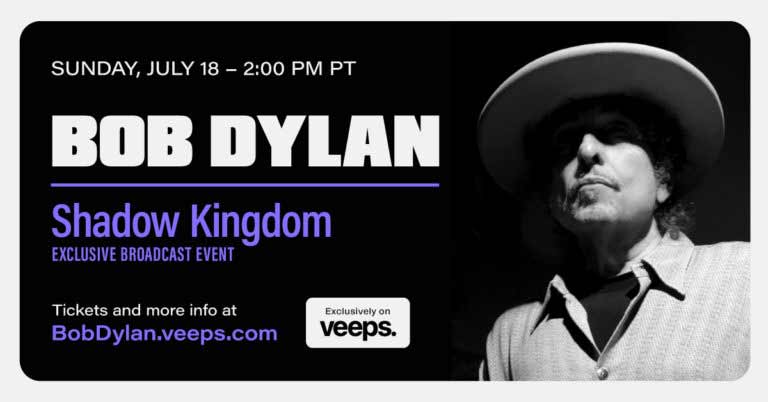 The legendary Bob Dylan has announced an online concert to air through Veeps on July 18th. Check out full info below from the official Live Nation press release.

On Sunday, July 18, at 2pm PT, Veeps will present Bob Dylan in an exclusive concert performance. ‘Shadow Kingdom’ will showcase the artist in an intimate setting as he presents renditions of songs from his extensive and renowned body of work created especially for this event. Tickets are $25 and access to this concert event will remain for 48 hours after the initial airing.

‘Shadow Kingdom’ will mark the artist’s first concert performance since December 2019, after his planned tours were cancelled due to the global pandemic, along with those of virtually every other touring artist. It will also be Dylan’s first performance since the release of his universally acclaimed album, ‘Rough And Rowdy Ways,’ which debuted in the Top Ten in 16 countries, and was the artist’s 18th studio album to debut in the U.S. Top 10. Rough And Rowdy Ways also debuted at #1 on Billboard’s Top Album Sales Chart.

“It’s an incredible honor and a high point for us all at Veeps to have the opportunity to be working with Bob Dylan, and to be a part of what is sure to be a truly special and historic performance, not only as professionals, but as music fans too,” said Joel Madden, co-founder of Veeps.

Tickets go on sale at 9:00AM PT on Wednesday 16 June at bobdylan.veeps.com.

Bob Dylan has released seven studio albums within the past 23-years; a creative span that also included the recording of an Oscar- and Golden Globe-winning composition, “Things Have Changed,” from the film Wonder Boys, in 2001; a worldwide best-selling memoir, ‘Chronicles Vol. 1,’ which spent 19 weeks on the New York Times Best Seller List, in 2004 and was recently named the greatest rock memoir of all time by Rolling Stone. He is the recipient of the Officier de la Legion d’honneur in 2013, Sweden’s Polar Music Award in 2000, a Doctorate from the University of St. Andrews in Scotland, and numerous other honors.

Bob Dylan has sold more than 125 million records around the world. ‘Rough and Rowdy Ways’ is the artist’s 39th studio album. An up-to-date overview of Bob Dylan’s career can be downloaded at: https://bit.ly/3vYTop3

About Veeps: Veeps is a direct-to-fan experiential platform, custom-built for artists, by artists. Founded in 2017 by Benji and Joel Madden, it is the music industry’s leading, premium live-streaming platform. Since then, Veeps has hosted hundreds of live-stream shows and events, in partnership with Live Nation, Veeps continues with a mission to power artists in the most critical early stages of their development, all the way through the biggest, most important moments of their careers.