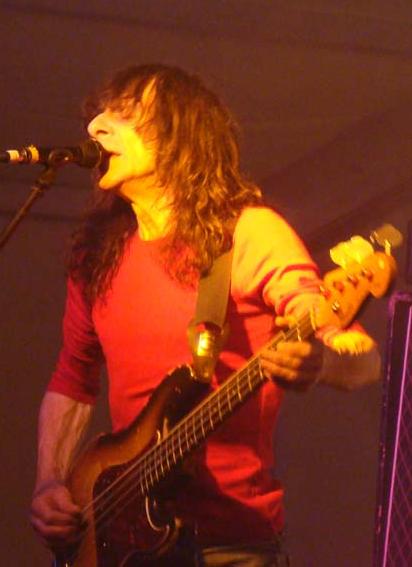 John Burke Shelley – best known as the former lead vocalist and bassist of Welsh hard rock and heavy metal band Budgie – has sadly passed away at the age of 71. Shelley, who suffered from Stickler syndrome, and on two occasions had an aortic aneurysm, died in his sleep at the Heath Hospital on January 10th, 2022.

Burke’s daughter Ela broke the heartbreaking news on social media on Monday (January 10th), she wrote: “It is with great sadness that I announce the death of my father, John Burke Shelley. He passed away this evening in his sleep at Heath Hospital in Cardiff, his birth town. He was 71 years old. Please respect the family during this time. With love, His four children: Ela, Osian, Dimitri and Nathaniel.”

Born in Tiger Bay (now known as Cardiff Bay) in Cardiff, Wales, Shelley formed Budgie in 1967 under the name Hills Contemporary Grass, but following a slew of shows in 1968, the band changed their name to Budgie and continued to record their first demo. Budgie’s original recording lineup was rounded out by guitarist/vocalist Tony Bourge, and drummer Ray Phillips. With Shelley being the only constant member, the band were active from 1967–1987, 1995–1996 and 1999–2010, and recorded 11 studio albums, with their last being 2006’s ‘You’re All Living in Cuckooland.’ The band’s final lineup in 2010 consisted of Shelley on vocals and bass, Craig Goldy on guitars, and Steve Williams on drums, percussions and backing vocals.

Following the news of Shelley’s death, Metallica drummer Lars Ulrich reached out via social media to pay his respects, “Thank you Burke for everything you did for heavy music and much next level appreciation for co-writing and creating two songs that Metallica were honored to record over the years, ‘Breadfan’ and ‘Crash Course in Brain Surgery’.” Shelley and his work with Budgie not only influenced Metallica, but also the likes of Iron Maiden, Megadeth, Van Halen, Melvins, Queens of the Stone Age, Alice in Chains, Soundgarden and many more.

One of Wales’ finest rock heroes Burke Shelley. Breadfan had a huge impact on me as a kid. In 1996 I was lucky enough to meet him and what a truly fun guy. He could hit the high and low notes with tremendous power. RIP pic.twitter.com/Xwr1peeXYi


"A very sad day… Burke Shelley of Budgie has passed away. Budgie were such a huge influence on us and so many other bands…we got to play with them a few times and a nicer guy you could not hope to meet. Condolences to his family and band mates."
John Gallagher Raven pic.twitter.com/2ZnvgaBVAB


Sad to hear of the death of Burke Shelley. We toured with Budgie in the late 70's. He was a really good guy.
Condolences to his family. pic.twitter.com/K1xGgKjos8


Sad to hear of the passing of Burke Shelley. I played support to them as far back as Persian Risk days. They were pioneers and produced some of the heaviest riffing you could imagine. Thoughts are with his family. RIP welsh hero.🎸 pic.twitter.com/xl53AZO77r


Burke Shelley’s passing reminds us of his immense talent whose body of work has inspired generations of musicians and will continue doing so long into the future.

Budgie are seated rightfully alongside the greatest rock bands of all time.


Such sad news about the passing of Budgie frontman Burke Shelley at the age of 71. My thoughts and prayers are with his family and close friends during this awful time…. 😔🎶🌹 pic.twitter.com/hO272stVj3


RIP to Burke Shelley of the UK prog-metal pioneers Budgie.

In 1975, Van Halen covered “In for the Kill.” It was most definitely an Ed and Al Van Halen pick for a cover … all part of that push and pull between Roth and the brothers as the band’s sound evolved pic.twitter.com/4fpuUwzJkI


On the quiet, Budgie are probably one of the most influential Welsh bands of all time.

A seminal part of the first wave of heavy metal, and a formative touchstone for everyone from Metallica and Iron Maiden to Alice In Chains.


Just heard the very sad news that Burke Shelley, leader of Welsh rock legends Budgie, has died. He was a brilliant singer and songwriter, and Budgie are still the great unsung band of the 70s, despite the various covers etc. Loved them since I was a kid… https://t.co/MQtgNwFzTq


Sad to hear of the passing of Welsh rock legend Burke Shelley. Here's a pic I took of him and his covers band playing a local pub in Newport in 2016. A nice chap. Always odd seeing him in this environment where so few knew his legacy, but he clearly enjoyed himself. pic.twitter.com/yjsVa44V8K


Woke up to the sad new that Burke Shelley of the band Budgie has died age 71. They were one of the first rock bands I really got into (1974) & have remained a favourite. Despite being cited as a huge influence they never got the recognition they deserved #burkeshelley #Budgie 😢 pic.twitter.com/tDxww3DZtZ


Sad news. RIP John Burke Shelley. I love Budgie – they were one of the heaviest, oddest bands of the 1970's. The first time I heard his voice I was *convinced* it was a woman singing – serious pipes. pic.twitter.com/ey6NC5P8eO


Sad to hear that Budgie frontman Burke Shelley has died. I was a big fan of Budgie when I was in my early teens and I still regularly listen to their ‘Never Turn Your Back On A Friend’ and ‘Bandolier’ albums. ‘Breadfan’ is undoubtedly among my all-time Top 10 favourite tracks. pic.twitter.com/vAgQLYOHYQ


Some words of wisdom from the late Burke Shelley of Budgie :

"I’ve had this idea most of my playing life : don’t do anything to please the crowd – have a little faith, and please yourself. That way you’re comfortable and you build a following of people who like what you do.”