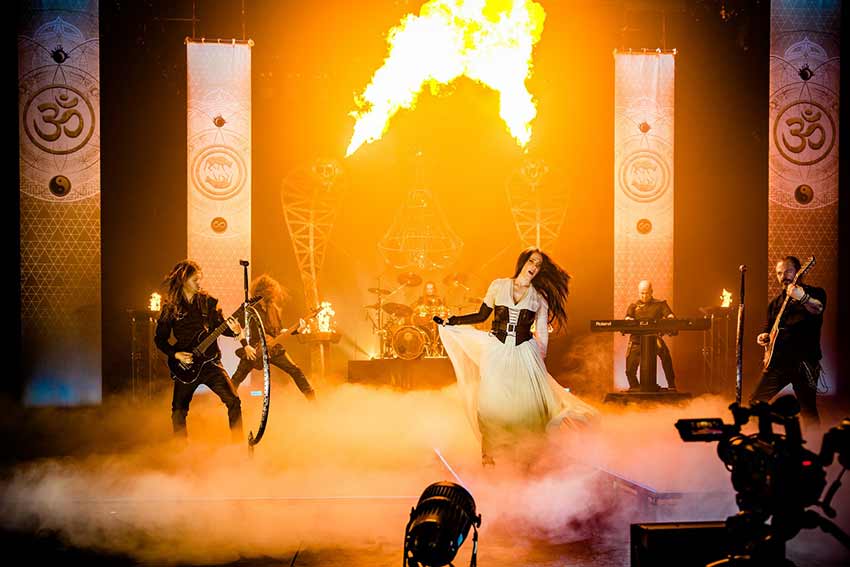 Dutch symphonic metal legends Epica have uploaded a live music video for their track “Unchain Utopia” — watch the clip below. The song appears on the band’s new live effort, ‘Omega Alive,’ which they plan to release on December 3rd, 2021 through Nuclear Blast Records (pre-order).

Here’s more info from a presser, “In June this year, symphonic metal titans EPICA unleashed a monument to their music, their career, and their enduring legacy as forebears of a whole genre. The worldwide streaming event “Ωmega Alive” was the EPICA show of your wildest dreams, brought to life by 75 artists and crew members – think Marvel meeting Cirque de Soleil in a Tim Burton universe!”

They add, “Tailor-made videos and graphic effects, spectacular pyro effects, rain, dancers, choirs and actors, all added to the aura of symbolism and cinematic splendor, that brought fans from over 100 countries to flock to their screens and witness a show that became the biggest concert event in the band’s 19-year-long history. Now, you can finally rediscover the entire opus in various audiovisual formats, available on December 3rd, 2021.”

Coen Janssen, the mastermind behind the show’s concept explains further, “What we wanted to do was the ultimate EPICA show where we could fulfill every dream we ever had, where there was room for all the ideas, effects and props that are just too big to be taken on tour.” Far from your usual streaming concert, the band developed a trademark feature called a “living backdrop”. “We built another stage right behind our stage where lots of things were going on the whole time. And we meant that very literally. Every song got something extra, something unique that was fitting its world.”

The press release ends with, “Directed by Jens de Vos (Panda Productions) and graced by a magical artwork by Heilemania, the DVD, BluRay, CD, and vinyl contain 15 EPICA classics, fan-favorites, as well as first-ever live performances from tracks off the band’s latest chef-d’oeuvre Ωmega, such as “The Skeleton Key” or the insanely monumental “Kingdom of Heaven Part 3”.”