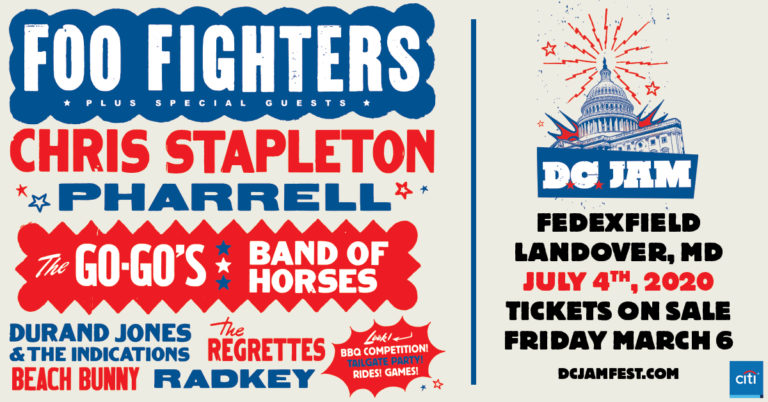 After two years and 70,000+ served, Foo Fighters are bringing the JAM back from CAL to D.C.: This July 4, consider yourself Foo-rmally invited to an all-day all-night celebration of the 25th birthday of that first album that started it all—all at FedExField in Dave Grohl’s formative stomping ground.

That’s right, that Grohl one-man-band-demo-turned-platinum-debut-album came into this world July 4, 1995. And now 10 albums, no less than a dozen GRAMMYs and countless trips around the arena, stadium and festival stages of the world later, it’s time to join Dave Grohl, Nate Mendel, Taylor Hawkins, Pat Smear, Chris Shiflett and Rami Jaffee in commemorating that milestone.

In addition to the customary main attraction of a patented Foo Fighters rockathon, the inaugural D.C. JAM will feature a full day and night of performances by ambassadors from points all over the musical map of the U.S.A.: From Lexington by way of Nashville, multiple Grammy, Academy of Country Music and Country Music Association Award winner Chris Stapleton; representing Virginia Beach, Academy Award nominee and multiple Grammy, BET, Billboard Music Award, and NAACP Image Award winning singer/songwriter/producer Pharrell Williams; from the earliest days of the Los Angeles punk scene, the first all-female band to top the charts with an album they wrote and played themselves, The Go-Go’s; Born in Seattle and bred in the Charleston SC lowcountry, Band of Horses; And rounding out the genre/geo-spanning D.C. JAM bill: Durand Jones & The Indications (Bloomington IN), The Regrettes (L.A.), Beach Bunny (Chicago), and Radkey (St. Joseph, MO). Live Nation will produce the event.

Foo Fighters and the festival organizers are of course cognizant of the fact that everyone needs an occasional reprieve from the rock, and as such D.C. JAM will feature side attractions including a BBQ Competition, a Tailgate Party, Rides, Games and more to be added and announced as the date nears.

Citi is the official presale credit card of D.C Jam. As such, Citi cardmembers will have access to purchase presale tickets beginning Tuesday, March 3 at 12pm ET through Citi Entertainment®. For complete presale details visit www.citientertainment.com.

Tickets will go on sale to the public beginning Friday, March 6 at 10am ET. For pre-sales and other information, go to DCJamFest.com