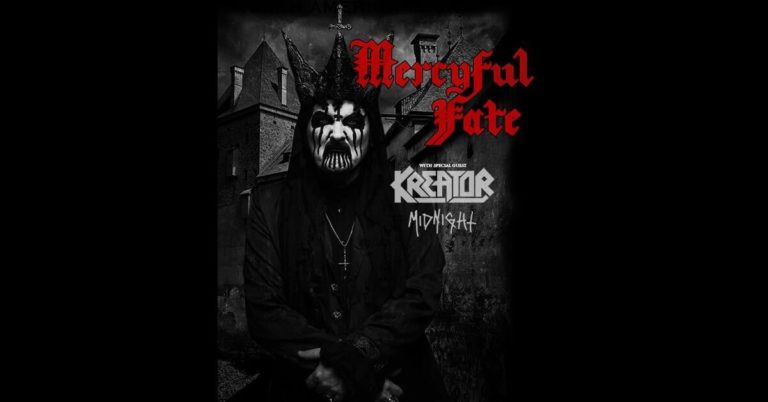 Mercyful Fate have announced their first USA and Canadian headlining trek in over two decades. Support will come from Kreator and Midnight. See full info below from the official announcement today.

Vocalist King Diamond comments, “These will be the first MERCYFUL FATE concerts in North American theaters in over twenty years. Memories of a lifetime. Your special chance to see MERCYFUL FATE with the full European festival production, but up close and personal. You cannot miss this… I hereby respectfully invite you to Come To The Sabbath by which you may free your soul and feast with us in the dark of Night. Witches and Demons, you may come as you are! Satanic Regards – King Diamond 666.”

Support for MERCYFUL FATE will be provided by Kreator and labelmates, Midnight. Various presales are available throughout the week: 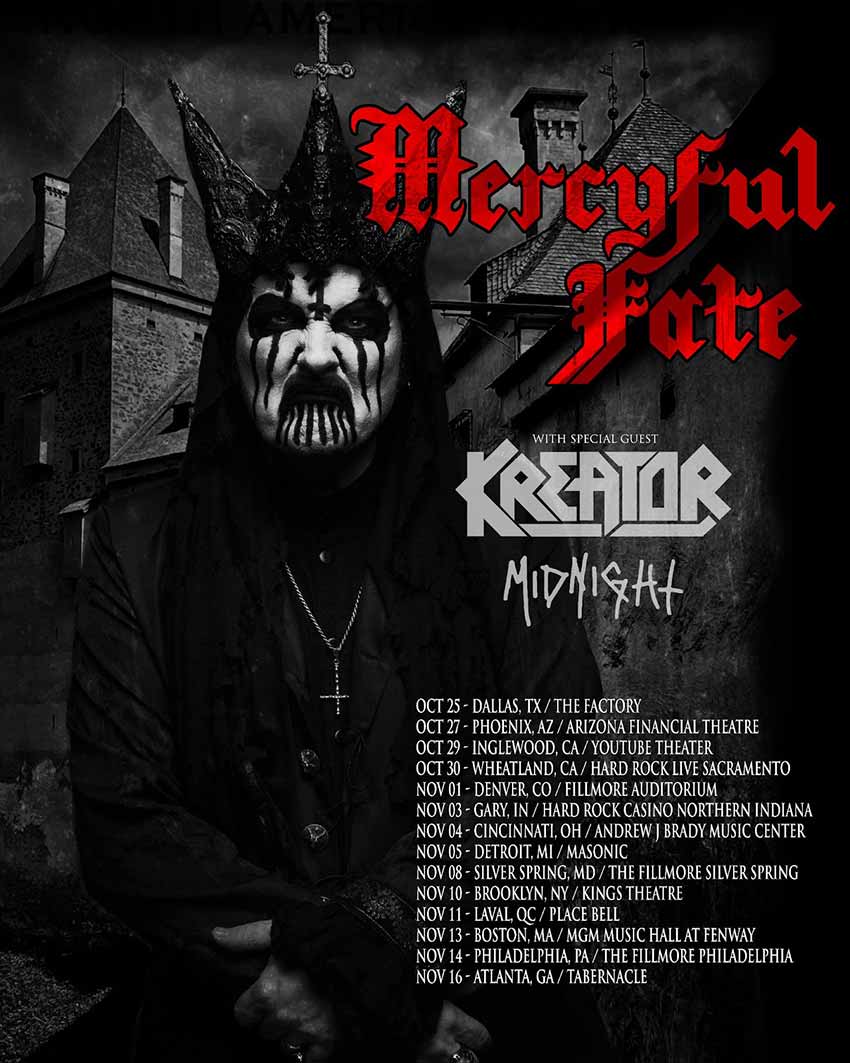 MERCYFUL FATE is currently working on a new album and recently gave fans a taste of the new material when they debuted a song called “The Jackal Of Salzburg” in Germany this past June as well as at Psycho Las Vegas. The band’s current lineup is King Diamond on vocals, Hank Shermann and Mike Wead on guitars, Bjarne T. Holm on drums and Joey Vera on bass.

MERCYFUL FATE was formed in early 1981 in Copenhagen, Denmark by vocalist King Diamond and guitarist Hank Shermann. They were later joined by guitarist Michael Denner and bassist Timi Hansen, and soon thereafter drummer Kim Ruzz would join to complete the band lineup. The band recorded two demos in 1981 and later signed with Rave On Records in Holland for the recording of their successful self-titled EP, released in November of 1982. ‘The Mercyful Fate’ EP was soon in heavy rotation around core metal radio stations, launching a new breed of heavy metal with their unique sound.

The band joined Roadrunner Records in 1983 and their debut full-length, ‘Melissa,’ was recorded and released that same year. The following year, MERCYFUL FATE returned to the studio to record their now legendary ‘Don’t Break The Oath’ full-length, released in September of 1984.

MERCYFUL FATE embarked upon a two month US tour in support of the record, which took them across the States several times sharing the stage with the likes of Motörhead and Exciter. The shows had created a brush fire within the metal community. The band reaped recognition globally, closing the year with a five-date tour in Germany with Motörhead, Girlschool, Helix, and Talon.

MERCYFUL FATE’s first concert of 1985 was in their hometown of Copenhagen at an old movie theater with a large capacity. The show sold out and their stage show exhibited a new level of distinction. The night was a huge victory and a new highlight for the band.

By April of 1985 however, MERCYFUL FATE decided to part ways for each to pursue new challenges. The King Diamond band was born and reaped critical acclaim the following years with five studio albums on Roadrunner Records. King Diamond has since signed with Metal Blade Records and is going stronger than ever before.

In the Summer of 1992, MERCYFUL FATE decided to reunite and penned a new deal with Brian Slagel and his label, Metal Blade Records. In The Shadows was released in 1993 and was an instant triumph furthered by a sold out US tour.

MERCYFUL FATE has gone on to release another five studio albums and have toured Europe, the US, and South America multiple times. The highlight of 1999 was their critically acclaimed album 9 which was followed by a European tour with Metallica, where King Diamond and Hank Shermann joined the band onstage several times for the medley “Mercyful Fate” which Metallica had recorded on their ‘Garage Inc.’ double tribute album the year prior. Tours in the US and in South America followed, marking the band’s last live performances for over a decade. MERCYFUL FATE then went on hiatus, but made a brief appearance when members joined Metallica onstage in 2011 for their 30th anniversary show in San Francisco, California.