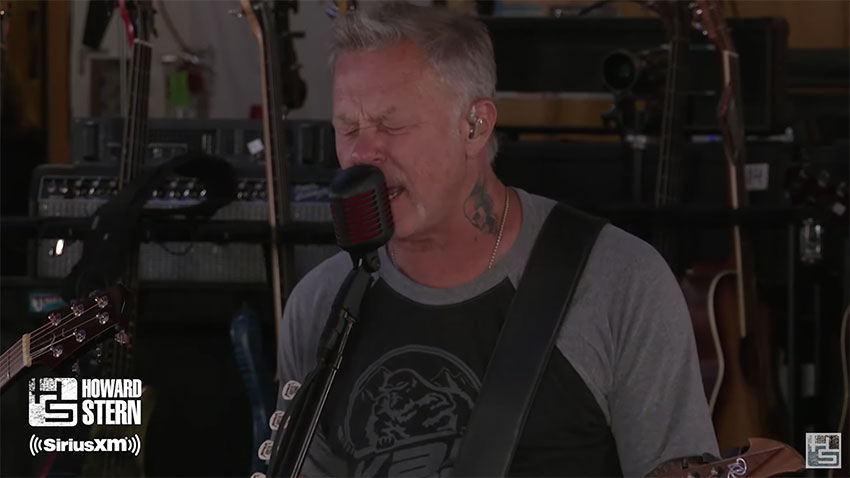 Metal legends Metallica returned to ‘The Howard Stern Show’ on SiriusXM last Wednesday, August 12th to perform a trio of songs and more.

To celebrate the 30th anniversary of their fifth studio album, aka their self-titled release aka ‘The Black Album,’ Metallica dished out epic tracks “Wherever I May Roam” and “The Unforgiven” via the comfort of their own personal studio in California.

To close out the mini-set, Metallica pulled out an unplugged version of their single “All Within My Hands,” which originally appeared on the act’s 2003 record, ‘St. Anger.’ The aforementioned live number also featured guest backup vocals from Avi Vinocur of Goodnight, Texas.

In addition, Metallica spoke to Howard about topics such as ’80s metal bands that they didn’t get along with, performing with Lady Gaga at the Grammys, how Kirk Hammett left Exodus to join Metallica, how the band rehearses with the San Francisco Symphony, why Metallica gives credit to punk rock for the band’s longevity, and reminiscing on writing songs with Lou Reed.

Check out footage from the appearance below.

“Wherever I May Roam”:

Metallica on the ‘80s Metal Bands They Didn’t Get Along With:


Metallica Talks Performing With Lady Gaga at the Grammys:


How Kirk Hammett Left His Band Exodus to Join Metallica:


How Metallica Rehearses With the San Francisco Symphony:


Metallica Gives Credit to Punk Rock for the Band’s Longevity: