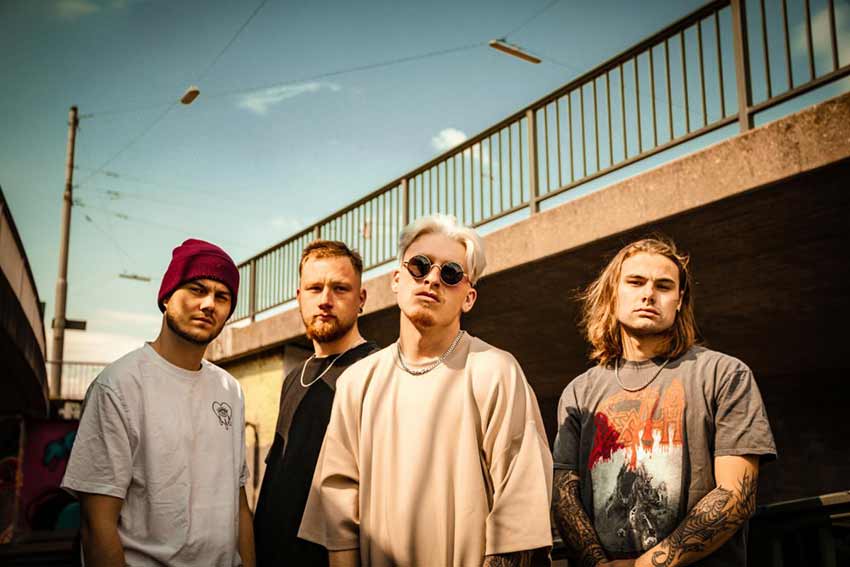 Swiss deathcore crew Paleface have revealed their new music video for track “Lights Out” — watch the clip below. The track hails from the act’s 2020 album ‘Chapter 3: The Last Selection.’

Speaking on the new video, frontman Marc “Zelli” Zellweger comments, “We wanted this video to be as beautiful and as aggressive as possible. Letting all the anger out is such a beautiful thing, especially in desperate times like these.”

Here’s more info via a presser:

Paleface was formed in Zurich, Switzerland in 2017 by vocalist Marc Zellweger (Zelli) and drummer Colin Hammond (CJ) having met through a mutual friend in 2016. After bonding over a shared love of beatdowns and hardcore, Zelli and CJ shook hands at a concert in 2017 and promised they would create the craziest beatdown band ever together.

They recruited guitarist Yannick Lehmann to the band and released their debut ‘Chapter 1: From The Gallows’ in 2018. Later that year, they brought bassit Tommy-Lee Abt to Paleface family. They played their first show in October 2018 and quickly grew in popularity with the song “Deprivation Method.”

In early 2019, Paleface started writing ‘Chapter 2: Witch King’ which was released in May 2019. The band started to gain international attention with the release of tracks “Human Hunter” and “Skin People.” They released the single “No Mercy At All” at the end of 2019 and started working on the final installment of the dark story they’d created with Chapters 1 & 2.

‘Chapter 3: The Last Selection’ was released on October 30th 2020 to much acclaim. Paleface released two music videos for huge tracks “Curse Us,” “The Rats” and “Skalpell” which quickly ranked high in the deadown/hardcore charts and saw that band become cover stars on Spotify’s Heavy Beatdown playlist. Their releases to date have seen them clock up nearly 3 million streams across all platforms and 50k monthly listeners on Spotify alone.

“Lights Out” is the final video to be released from ‘Chapter 3: The Last Selection.’ The band will be continuing their reign of brutality with new music to come later this year.

The neutrality Switzerland is known for globally does not apply to Paleface.

They came to destroy.