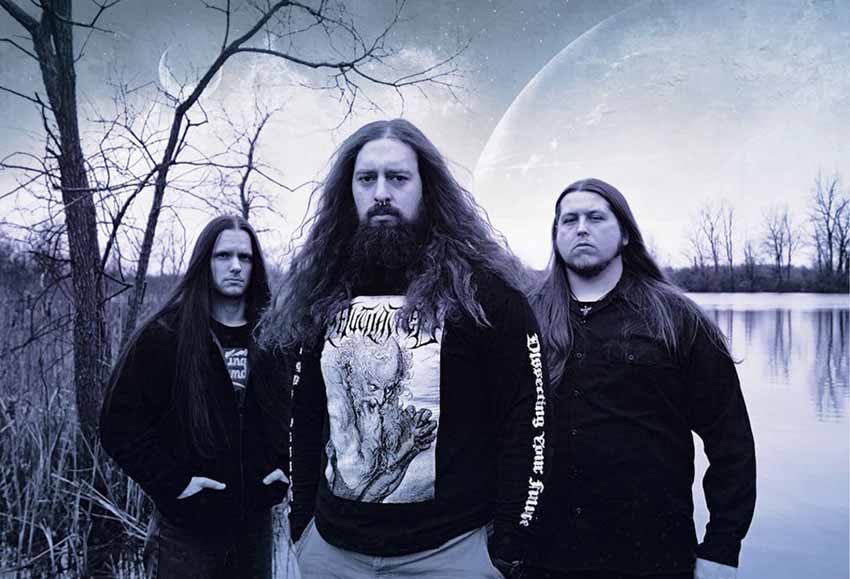 
Here’s more on the band via Prosthetic Records:

What started as a side project during some barren months in the wastes of Northwest Ohio, ASTRALBORNE has morphed into a force to be reckoned with. Having already picked up various accolades from websites and magazines from around the globe, ASTRALBORNE look set to go from strength to strength.

ASTRALBORNE came into being when Jayson Cessna (drums) and Derik Smith (guitars) had wrapped up work on Hammer Horde’s third album and they found themselves with an excess of time and an abundance of creativity. However, they knew that their artistic leanings were not suitable for their Viking-themed band, and set out on the path that led to them forming ASTRALBORNE, with Paul Fuzinski (bass, vocals).

The trio wrote and arranged songs that comprised of both new and old material, revisiting and reimagining missives from their past lives, former bands and long forgotten periods of creativity. The resulting material was recorded in April of 2017 and forms an 11 track opus that fuses melodic death, black and thrash metal into a diverse aural assault. The outcome is an uncompromising tribute to melodeath’s forefathers, with enough modern-day aggression to satisfy both old-school and new-school listeners alike.

Eschewing the historical and fantastical lyrics of their Viking themed work, ASTRALBORNE have found freedom to explore more personal and raw concepts on Eternity’s End. By embracing realism and rooting themselves firmly in the present day, the tracks on the album explore the symbolism of death – plus various offshoots from that central theme. Be it divine punishment, the bubonic plague or the feeling of watching everything around you perish – ASTRALBORNE have explored the many facets of death in a myriad of ways.