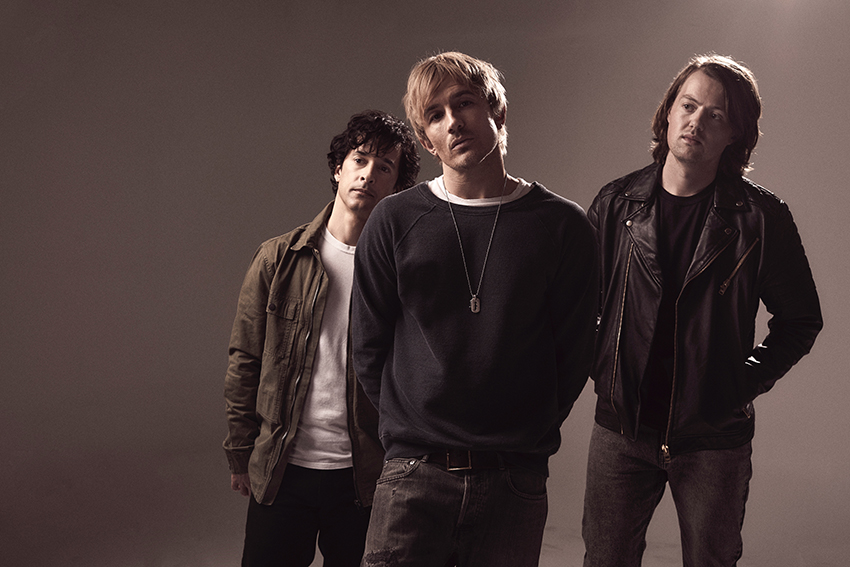 Blame Baby are exclusively premiering below their new DIY music video for fresh song “Silhouette,” which was produced by Frederick Thaae (Kate Nash, Saint Motel, The Glorious Sons) and marks the second 2020 single from the LA-based rock trio.

Here’s a little background info on the band, the three musicians (pictured left to right in the above photo: bassist Omar D. Brancato, lead vocalist/guitarist Jesse Johnson, and drummer Matt Tucci) met while performing together in a production of ‘King of the Road: The Roger Miller Story’ (a musical based on said late country music star).

In addition, Tucci runs the popular drum forum Groovru, Brancato is an accomplished composer/orchestrator for film and theatre, and Johnson (son of actors Don Johnson and Patti D’Arbanville) has earned acclaim as an actor, and has appeared in the National Geographic Channel movie ‘Killing Lincoln’ (he played John Wilkes Booth) as well as the indie flick ‘Chapman.’

Back to the aforementioned new clip, it was filmed in front of a low-budget green screen and sees the band traversing through sunny beaches, mountain tops, mystical forests, virtual landscapes and even outer space, to name a few locales, in a farcical video that clearly never takes itself too seriously.

“We were the directors, the lighting department, the designers and craft services,” states Brancato regarding the filming of the video. “It was just us three doing everything one at a time on a green screen, and I figured we should try and be ridiculous. No idea was too stupid.”

Tucci adds, “A lot of times, limitations can provide opportunities for greater creativity and I thought it was great to do something silly, lighthearted, and fun to give people a chance to escape for a minute.”

Johnson sums it up, “Considering the climate of the world in regards to the pandemic and social unrest, it seemed really important to make a video with some levity and good old fashioned tongue-in-cheek to give us and others a welcome reprieve from the severity of the world around us. I told the guys ‘I bought a green screen and we’re making a hilariously bad green screen video.’ It’s the only thing we’ve unanimously agreed upon.”

Check out the video for yourself: