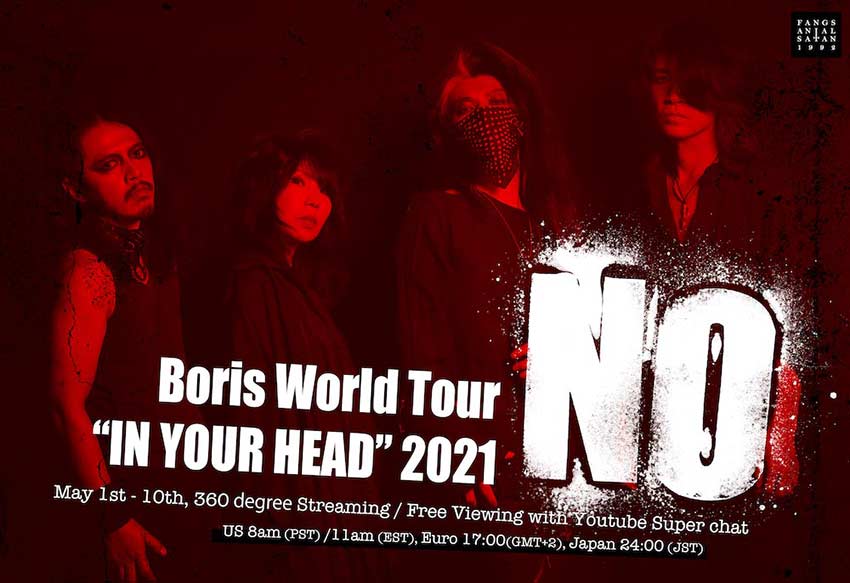 Japanese experimental metal/rock act Boris will stream the release party for their 2020 album titled ‘NO’ this spring. The event initially took place in November of last year, marking their first streaming show ever, and featuring video shot with a 360 degree camera allowing for audience participation.

The streaming viewing period will begin on May 1st and will run through May 10th; premiering Saturday the 1st at 8am (PST) and 11am (EST) / Euro 17:00 GMT+2. The program run time is 50 minutes and can be viewed through Boris’ official youtube channel here.

Here’s more info from today’s announcement, “Shortly after the COVID-19 pandemic crisis broke out, Boris released their album NO to the world in quick fashion. While the world fell into stagnation, Boris displayed a capability to move forward into the future with the album’s initial release on Bandcamp in July of 2020. CD and vinyl versions were released in Japan in November 2020, and the corresponding release party was recorded behind closed doors at Tokyo Venue Fever. A full live set of the album NO was shot using a 360 degree camera.”

They add, “The intent of calling this a “tour” is to give meaning to the experience of “participation”, which live shows usually have. Differing from conventional live concert footage, that, rather than a fixed camera angle, it is possible for viewers to look freely in any direction they wish to in a full 360 degrees. While it is still currently difficult to hold live shows as they were held before due to limitations and restrictions from the coronavirus pandemic, here is a new live experience that the audience can participate in. As the camera and your eyes become one in the same, each time you watch, it will create a new experience and passage of time. The cutting edge of Heavy Rock along with the power of your imagination bring this remarkable innovation to the world.”

Boris comments: ”You will experience a Boris show where YOU are at center stage.”

As noted, stream viewing is free, but a donation of $10 is suggested. “Contributions can be made directly to the band, via PayPal, at the following address: https://www.paypal.me/evilstacklive,” the say.

Check out a teaser trailer below.