After debuting a massive revamp of the festival grounds in 2021 and welcoming a record-breaking crowd of 75,000 people, Inkcarceration Music & Tattoo Festival aims to make the 2022 edition the biggest one yet. Over the weekend of July 15-17, music fans will converge for three days of nonstop music, tattooing, haunted attractions, and more, all held on the historic grounds of the Ohio State Reformatory (made famous by the movie The Shawshank Redemption) located in Mansfield, Ohio.

The event continues the ongoing partnership of America’s largest independent festival producer Danny Wimmer Presents and the creators of Inkcarceration, who together produce an event like no other. Passes for the 2021 event sold out in the first week, marking the fastest sellout in the festival’s history, so fans are encouraged to buy early for 2022 to reserve their spot for one of the most anticipated events of the summer.

Says David Draiman of Disturbed, “We are thrilled to be playing on the historic and hallowed grounds of the Ohio State Reformatory for our first Inkcarceration. Ohio, Are You Ready?”

Papa Roach’s Jacoby Shaddix adds, “We are excited to be part of Inkcarceration this year. Epic lineup, can’t wait to see all you Inkmates!”

Inkcarceration co-founder Daniel Janssen says, “The 2022 edition will be, by far, our most ambitious year yet. The partnership with the Danny Wimmer Presents team has really enhanced all aspects of the festival and fan experience. Seeing the excitement this event continues to bring to this state and city of Mansfield, along with the fan support from all over the country, makes me so proud to call Ohio my home.”

The current Inkcarceration Music & Tattoo Festival 2022 lineup is as follows (subject to change):

In addition to enjoying the diverse music lineup, fans will be able to partake in the onsite tattoo convention and book appointments with more than 30 tattoo shops and artists. Nightly tattoo competitions will be judged by musician and Big Brother alum Jenncity, actor Robert LaSardo and tattooist Caleb Neff. As well, there will be complimentary tours of the famous Ohio State Reformatory prison. Onsite, there will also be gourmet food, a wide selection of beverages, camping and the return of the award-winning Haunted House attraction Blood Prison (bloodprison.com), for additional purchase.

Weekend Camping Packages are available for both car + tent and RVs. General Weekend Tent Camping starts at $225 and includes 500 square feet of space for two people, access to the A/C Camping Lounge, optional breakfast, lunch and drinks available for purchase, dedicated shuttles to and from the festival, re-entry during the festival via the camping shuttles, access to Camping Hydration Station, and access to showers and restrooms. General Weekend RV Camping starts at $380 and includes the same amenities as Tent Camping. RV sites with hookups for electric and water are also available for purchase. Admission to the festival is not included in Weekend Camping Packages and must be purchased separately.

Hotel packages, bundling hotel nights and festival passes into one purchase, are also available. All festival passes, including Hotel Packages and Camping, may be purchased at inkcarceration.com/passes.

VIP passes offer the best way to enjoy the fest, including a commemorative VIP laminate and wristband, dedicated entrance lanes into the festival and entrance into the VIP area, which includes an elevated and shaded viewing deck, an air-conditioned lounge with comfortable furniture, and audio and video streams of the main stages. Other VIP amenities include: a dedicated merchandise stand, dedicated VIP locker rental with charging capabilities (for additional purchase), air-conditioned & flushable restrooms, and premium food & drink offerings (for additional purchase).

Ohio State Reformatory’s historic building and grounds provide a perfect setting for Inkcarceration. The massive, awe-inspiring locale is recognized as not only one of the most haunted reformatories in the country, but also as the filming location for multiple Hollywood films. The most famous of these is the 1994 classic and IMDB highest rated movie of all time, The Shawshank Redemption.

The Ohio State Reformatory is centrally located, about an hour from Cleveland, Columbus and Canton/Akron, and within a three-hour drive from Toledo, Dayton, Cincinnati, Youngstown, and parts of West Virginia, Michigan, Kentucky, Indiana and Pennsylvania.

Now returning for its fourth year after launching in 2018, Inkcarceration nearly tripled its inaugural year’s attendance in 2019, drawing 45,000 fans from nearly all 50 states, and welcomed a record-breaking crowd of 75,000 in 2021 after changing the layout of the event to allow for greater capacity. Inkcarceration has been awarded Mansfield’s Tourism Award of Excellence, and has been recognized by the United States House of Representatives, Ohio Senate, State of Ohio Representatives and Congressional Proclamation.

Inkcarceration is co-produced by Danny Wimmer Presents, one of the largest independent producers of destination music festivals in America, and Reinkcarceration LLC, a partnership that formed with the original founders of INK in 2021. 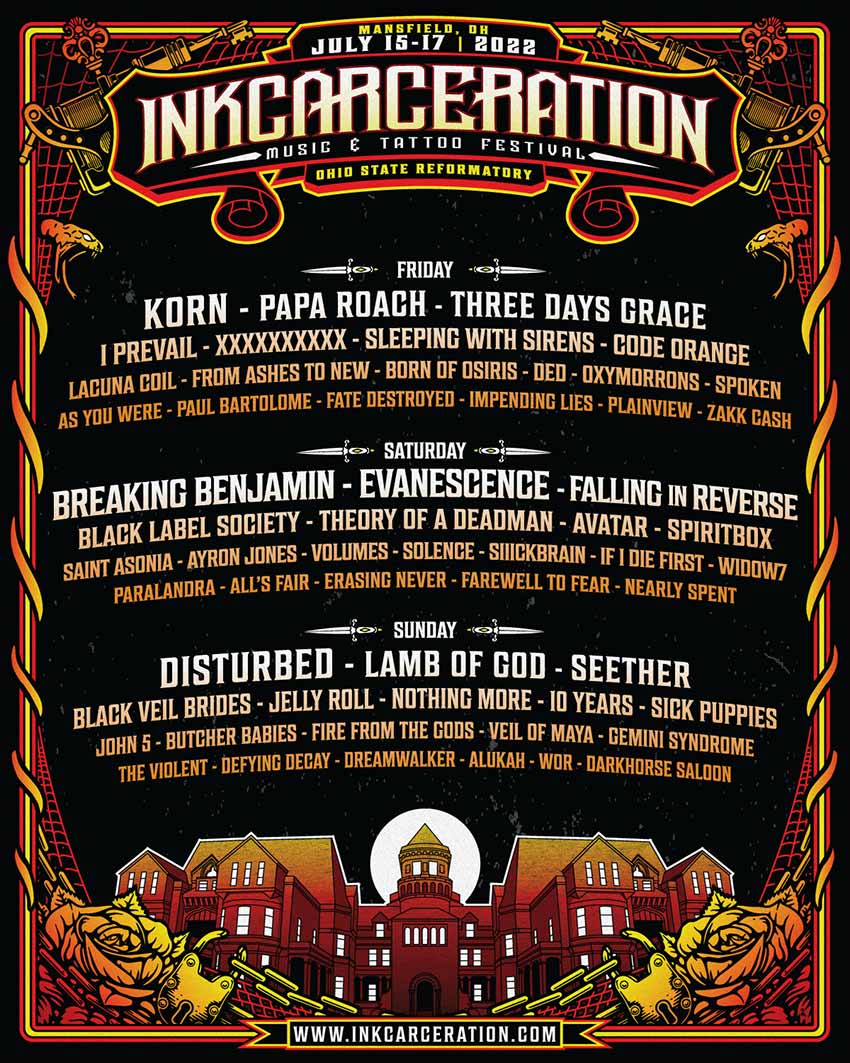