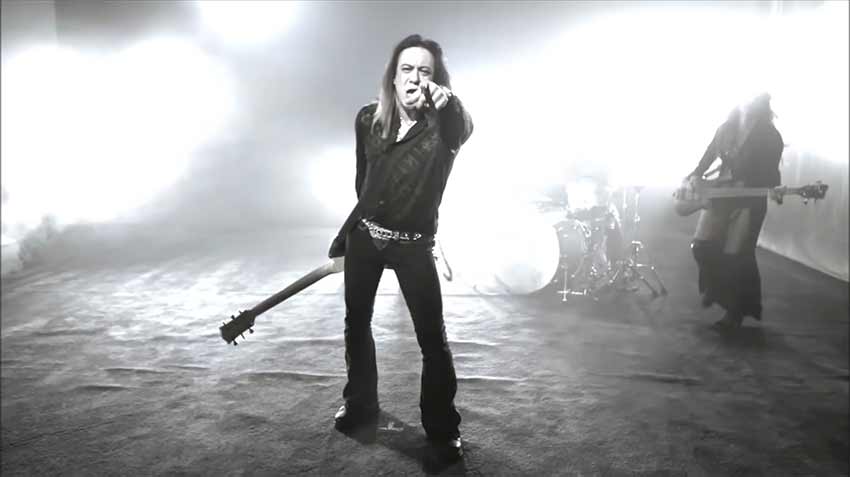 UPDATE 7/15: Former Cinderella members Tom Keifer, Eric Brittingham and Fred Coury have released a joint statement on Jeff’s passing, it reads, “Heavy hearts cannot begin to describe the feeling of losing our brother Jeff. The bond between us over decades of creating music and touring the world is something that we as a band uniquely shared. Those memories with Jeff will be forever alive in our hearts. It’s unimaginable that one of our band brothers has left us. We’re sending his wife Debinique, his son Sebastian, family, and friends our deepest condolences.
Jeff’s memory and music will be with us forever.
We all… band, family and management appreciate the overwhelming outpouring of love.
Rest In Peace Jeff”

Guitarist and backing vocalist of glam metal vets Cinderella Jeff LaBar has died at the age of 58. The news was confirmed by his son Sebastian LaBar, who plays guitar in Tantric.

Earlier today, Sebastian wrote, “So i just got the call… Jeff LaBar, my father, my hero, my idol, passed away today. I’m currently at a loss for words. I love you pop! ❤️ if you could, please share pictures or video of all the fun times we all had with my dad. It would be greatly appreciated.”

Jeff performed with Cinderella from 1985 (replacing original guitarist Michael Schermick) up until the band’s break up in 2017. Jeff contributed to all four of Cinderella’s studio albums: ‘Night Songs,’ ‘Long Cold Winter,’ ‘Heartbreak Station’ and ‘Still Climbing.’

“During Cinderella’s temporary break-up in the mid-1990s, LaBar supported himself by running a pizza shop with his brother and by doing assorted construction jobs.

LaBar was also in a side band with Cinderella bandmate Eric Brittingham called Naked Beggars. In April 2007 LaBar and his wife parted ways with Naked Beggars. They hosted an internet radio show “Late Night with the LaBar’s” on www.realityradio.biz.

In 2012, LaBar and Cinderella completed their 20th anniversary tour with fellow rock veterans Poison, who were also celebrating 20 years in the business.

LaBar’s debut solo record “One For The Road” was released August 2014. Jeff toured in support of his solo record with his son Sebastian and Jasmine Cain.”

Jeff’s cause of death has not been revealed as of this posting. See tributes to Jeff below. RIP.


Just heard that my pal and Philadelphia Eagles compadre Jeff LaBar passed away today!!! This is a tough one!!!! A great guitar player, Dad, and a incredibly sweet funny guy!!!! Rest In Peace buddy!!!! 🦅🦅🦅 @jeff_labar #ripjefflabar pic.twitter.com/7nkoRdw9NL


I have such good memories of Jeff LaBar with Cinderella. He never disappointed. I loved the way he could sling his guitar all the way around. Grateful I was able to see him in my lifetime.


So saddened to hear of the passing of Jeff Labar, thank you for everything. You will be missed, rest easy. 💔👼🏼 pic.twitter.com/U9uPaugKO3


RIP Jeff Labar, guitarist of classic glam metal band Cinderella. They were the first concert DVD I had as a kid, and I always loved their albums like ‘Night Songs’. Thanks for the great music😔🤟. #jefflabar #Cinderella pic.twitter.com/ZFHOHuRvuw


Jeff Labar from Cinderella passed today… friend sent this to me. My 80s crush..condolences to his son Sebastian & family! Argh great musician gone before his time! pic.twitter.com/FrbbbWX8Kd


R.I.P. Jeff LaBar. I tore this ad out of a Guitar for the Practicing Musician in high school and had it taped it to my wall. Such a great band. pic.twitter.com/DEA6W4wXwY


Saddened to read tonight that Jeff LaBar from Cinderella has died. I've had one of his 'Long Cold Winter' plectrums mounted up in the PCS365 archive for years. Those first three Cinderella albums really left a mark on me. Great band, great guitarist. Very sad news #RIP #jefflabar pic.twitter.com/mIPke5T5Vu


Today we have lost another great man in the music industry.
I just read the news and it is confirmed that Jeff LaBar from the rock band Cinderella has passed on. This is absolutely heartbreaking news.
My deepest condolences to his entire family, friends, and fans.
RIP🙏🏻 pic.twitter.com/EfuA8XV71w


RIP Jeff LaBar. He was the guitarist in Cinderella.

So many great tunes, and was always fun to watch in concert.


I’m deeply saddened to hear the news of the passing of Jeff LaBar. I had the honor of meeting Jeff multiple times when he would attend our shows in Nashville. He was always a gentleman & very kind. May God bless you Jeff & may God bless the LaBar family, friends & fans worldwide pic.twitter.com/QeR1va5rZT


In complete shock over the news that Jeff LaBar has passed. Sending love to his family, friends, and fans. Blast some Cinderella extra loud this evening. 💔 pic.twitter.com/SypFMSs3kR