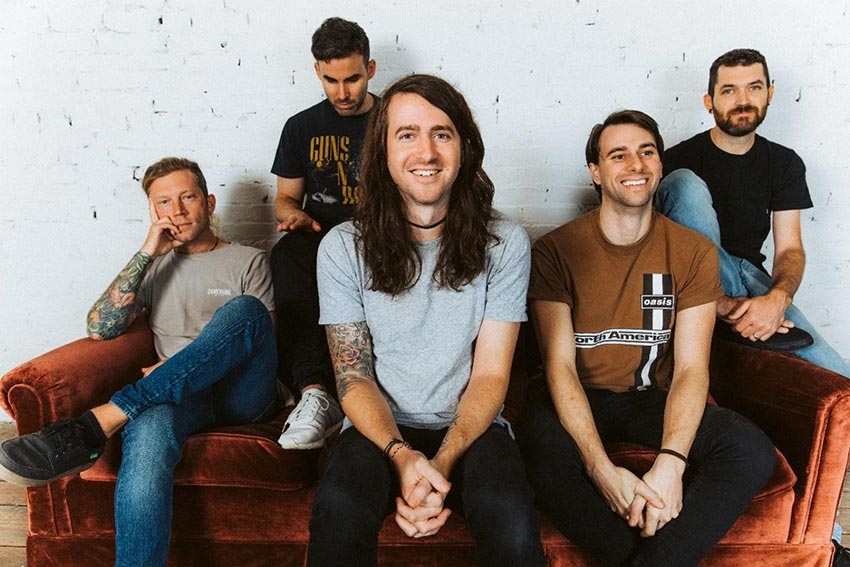 Alternative mainstay Mayday Parade has announced the release of Out of Here – a brand-new EP due out on October 16th, 2020 via Rise Records. Along with the announcement, the band has shared new song “Lighten Up Kid” – listen via your preferred listening service or check out the lyric video here [also embedded below]! Pre-orders for Out Of Here are available starting today.

In early March, Mayday Parade – Derek Sanders, Brooks Betts, Alex Garcia, Jake Bundrick, and Jeremy Lenzo – stepped into the studio with longtime collaborators Zack Odom and Kenneth Mount to record the EP. On “Lighten Up Kid,” the band continues to explore the power of self-love and finding confidence within, a theme that has run deep throughout their catalogue. “’Lighten Up Kid’ is about trying to find yourself and the strength to keep fighting for what you believe in,” Bundrick said. “It’s about being or feeling cut down and hung out to dry but standing up for yourself in the end.”

The EP follows the release of 2018’s Sunnyland LP, the band’s 5th full-length album which has streamed over 62 MILLION times and took the band to five continents since its release. A band known for their high-energy and almost non-stop live shows, Mayday Parade had to cancel their North American Tour in support of their newly released single “It Is What It Is” in early April along with several festival appearances slated for this summer. The cancelled touring hasn’t stopped them from connecting with fans on a series of live Happy Hours throughout quarantine and earlier this summer, they released a feel-good cover of The Beatles’ classic, “I Want To Hold Your Hand” which featured friends including The Maine’s John O’Callaghan, We The Kings’ Travis Clark, Dan Lambton (Formerly of Real Friends), Knuckle Puck’s Joe Taylor and Grayscale’s Collin Walsh.

Fans can also look forward to special themed, ticketed livestreams planned throughout the fall to tide fans (and the band) over until they can return to the road. 2021 is already shaping up to be an exciting year with performances at Riot Fest (Chicago, IL), Four Chord Music Fest (Pittsburgh, PA), Nova Rock Festival (Austria), Greenfield Festival (Switzerland), Hurricane Festival (Germany), and Southside Festival (Germany) with much more on the horizon.

For the most up to date information on Mayday Parade, visit their website.