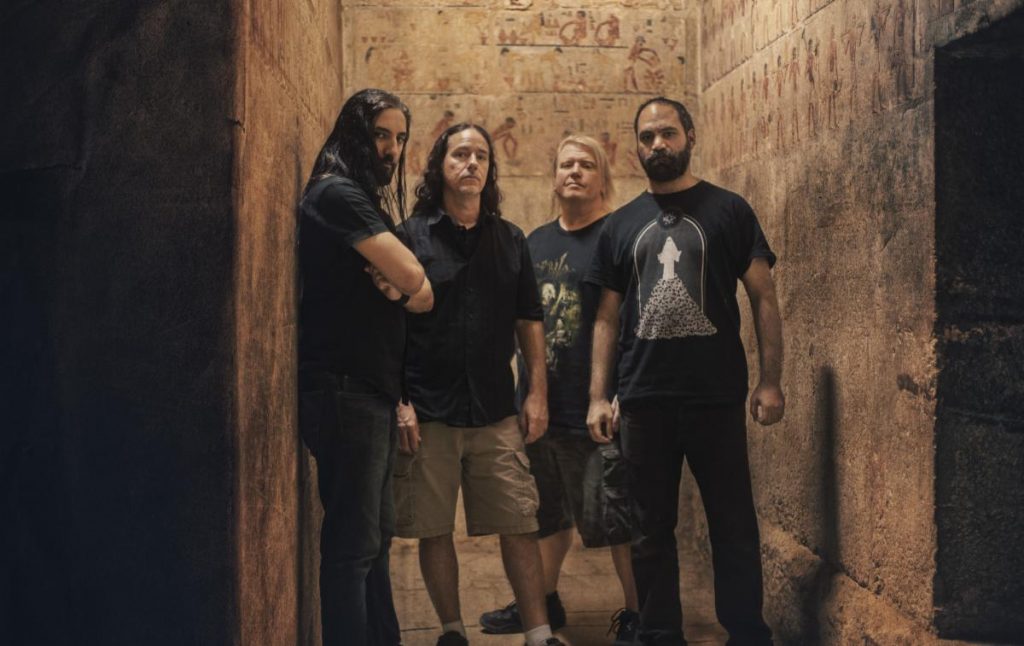 Egyptian-American artist, director, and death metal musician Nader Sadek has announced his four-track EP titled ‘The Serapeum.’ Set for release on November 20, 2020, the effort marks Nader’s first release since 2014’s ‘The Malefic: Chapter III’ EP and serves as a teaser for Sadek’s upcoming ‘Malefic’ full-length record (due out in early 2021).

The Serapeum features principal members Karl Sanders (Nile), Derek Roddy (Serpents Rise), and Mahumud Gecekusu (Perversion), who visited Egypt in 2017 at the invitation of SADEK and Cairometal.net, alongside a host of equally notable guests. Marking Sanders’ and Roddy’s first ever visit to the ancient land, the EP is monikered after an ancient Egyptian subterranean burial chamber and reflects the collective’s deep inspiration by the grounds explored. SADEK himself recorded the vocals inside the Pyramid of Snefru.

The second version, “The Serapeum: Polluted Waters,” features Sanders’ signature tone on rhythm guitar yet offers a different angle of experimentation, with the inclusion of eastern harmonies and drones provided by Alex Zubair (Nephelium), and instead of chants, Nancy Mounir, among Egypt’s top musical talents, adds the ever haunting theremin to the mix. Dominic “Forest” Lapointe (Augury) plays the low end, and Gecukusu swaps solo spots with Sanders on this version. Both versions feature Roddy’s staggering drum work along with SADEK’s ferocious vocal delivery and his first ever in-studio vocal recording. To complete this musical encounter with the archaeological wonders of Egypt, SADEK recorded the vocals inside the inner chamber of Dahshur’s “Red Pyramid.”

“ReSarcophogus,” recorded inside a sarcophagus at the Serapeum, appears between the two versions and used binaural mixing by Ahdy Khairat while the final track represents the first (and last time) “The Serapeum” was performed live, and features Zubair, Jim Ross (Bandwhore), Kevin Paradis (Benighted), and George Maier (ex-Pestilence).

Thematically, NADER SADEK’s The Serapeum draws inspiration from the contrast between the wondrous mystery of the Serapeum and its undervalued status today as simply a tomb for bulls. As an underground complex of twenty-four eighty-ton sarcophagi, many archaeologists consider it a stranger and more complicated legacy than the pyramids. Notes SADEK, “By recording in the Serapeum and the Red Pyramid, not only did we want to take advantage of the amazing acoustic effects of these ancient structures, we wanted to explore how the powers that be arrogantly dismiss that which they don’t understand.” SADEK explores this theme and draws parallels in the lyrics like, “Bull tomb uncovered, fallacy discovered / The reign of lambs begotten,” and, “Dead Serapis’ decay, sands triggered, shall pay / Serapeum! Rise! and confront us with the truth’s majesty.” These lyrics symbolically portray the relationship of modern to ancient Egypt, once the greatest civilization, now a cesspool of poverty and dilapidation. The Serapeum, like the musical performances on this single, will find its admirers in those who reject the shallow and superficial comforts of the familiar.

Check out an EP video trailer below, and pre-order HERE.