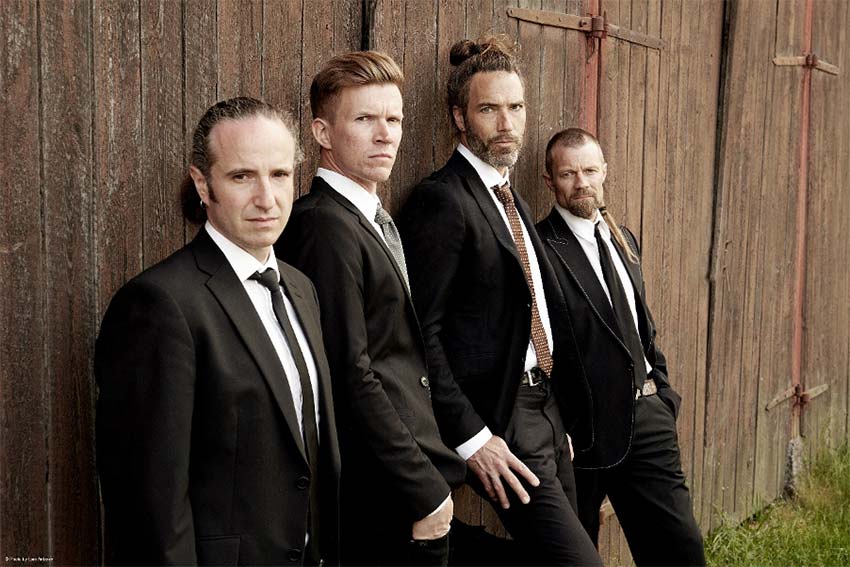 Sweden’s Pain of Salvation move yet another step closer to the release of their upcoming new studio album ‘Panther,’ due out August 28th, 2020 worldwide via InsideOutMusic.

The Progressive Metal/Rock innovators now launch the album’s title-track, “Panther”, as single and in a video clip scripted/directed by Lars Ardarve and Daniel Gildenlöw and filmed/edited by Lars Ardarve, to be seen here:


Pain of Salvation’s Daniel Gildenlöw checked in with the following comment about the song:

Of course we need to introduce you to the title track of our coming album. PANTHER. In many ways, the lyrics and concept of the PANTHER album have grown out sideways from our previous album IN THE PASSING LIGHT OF DAY – branching out like a new tree from the stem, specifically from the track FULL THROTTLE TRIBE. Another trigger for the album was the chorus of the song PANTHER:

“How does it feel to be you?” she once asked me

PANTHER is an album with many layers, but at the heart of it you will find my lifelong struggle to calibrate my interface towards mankind, trying to calculate the offset to a species that I have on some levels always felt myself estranged to. A feeling I think many can relate to. This is depicted in the title track, which is one of the album’s corner stones.

Storm-born, lull-bred, semi-tamed – we seem to be the same, but I pretend…
The work on this song was intense, almost feverish, and I felt obligated to let it become what it wanted to become, without fear or prejudice. This pushed me into very specific sounds and approaches. You may not think it, but this song is in fact among the most guitar dense tracks in the history of the band. There are 16 tracks of guitars in this song. Yep. Only, many of them may sound different to what you are used to. What you might think are loops are actually played guitars.

I have always felt that music is at its best when it comes from a source of passion, frustration, courage and curiosity. That has been, and will always be, my northern star in creativity. PANTHER is all those things. I was attracted to hard rock and metal as a kid because it sounded new, it sounded brave and it was pushing things, restlessly being on a journey to somewhere. If metal is to make any sense to me, it needs to keep pushing and keep being brave. And progressive music needs to keep progressing.
Damn, maybe this sounds too pretentious, forget it, just step on the rollercoaster and ride with us! Find your inner panther… 🙂

And Gildenlöw added the following about the video clip itself:

Due to the situation in the world right now, we find it more important than ever to provide our fans with visual representation of what we are and what we do, artistically, since touring is not an option. See it as our equivalent of FaceTime and you are all our beloved grandmothers. And now we are calling you up again to ask you how you are doing and to let you see your grandkids (they are growing up so fast). Today you will be talking to PANTHER, your third grandchild from our upcoming album with the same name.

This video was born in the blink of an eye. See, we were recording the video for RESTLESS BOY and I just figured, hey, now that we have an entire stage set up in Skjulstahallen (Eskilstuna), let’s just quickly shoot another video after we are done with that video. And so we did. With about an hour to go, I quickly sent over the audio file to Barni, and while he was setting it up for the PA we dressed up and then we played through the song three or four times, with Lars filming it, shooting from the hip.
It was a very nice feeling, because RESTLESS BOY was so planned in detail – in order to be able to play with different speeds in different parts of the frame, we had to be very precise in our movements and use no changes in lights or camera angles. Now, all of a sudden, we could all just rock out. But this also means that this video for PANTHER is by far the fastest one we’ve ever done, and the one most governed by serendipity.

At the same time, this third video will make very clear that these last three videos all play into each other to form the developing visual world of PANTHER. They intersect, intertwine. Go ahead, pat them if you like. If you dare.

Most recently, an interesting drum playthrough video clip by Pain of Salvation’s Léo Margarit has also been launched here:

RESTLESS BOY was one of these tracks where we really wanted to have a loop/programmed drums feeling. We wanted super dry drum sounds for the verses in contrast with the “choruses” (if we can call them that…) where the sound should be big, open and in your face, kind of ugly/nice, if you know that I mean. So in the studio we ended up recording verses and choruses separately, rebuilding the drum set in between. For that playthrough I decided to try to combine the 2 different sounds in one kit and this is what I came up with. The dry sound set consists in a Sonor Designer 20 inch bass drum, 3 toms from the same drums (14/15/16), all very muffled with fabric, and an ASBA Revelation snare drum, also muffled. The “ringing” set is a Drumcraft Series 8 24 inch bass drum and a Sonor Designer piccolo snare drum (14X4).