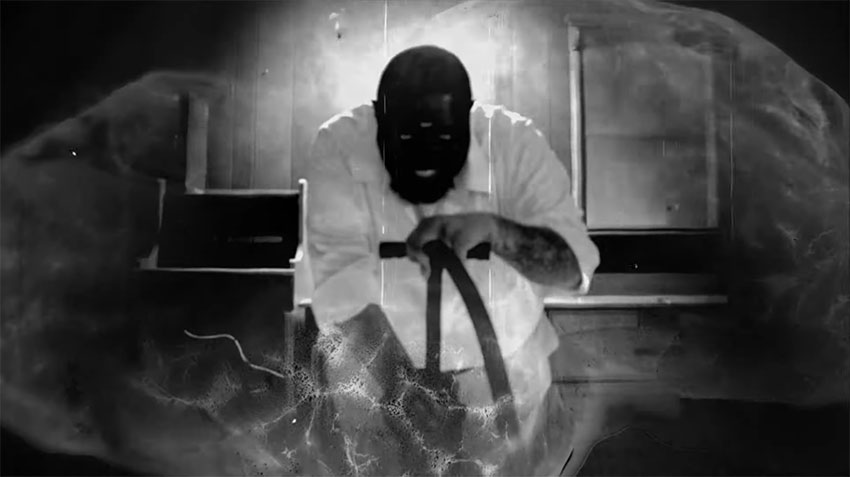 The inspiration for this video/song is a part personal experience, part Robert Johnson acknowledgment as the originator of taking the left-hand path of music, and part from a story out of Malachi Martin’s book Hostage To The Devil called ‘The Smiler.’ On tour back in 2014, we stayed with a guy we met named Matt in Baltimore. He had the book and I read through half of it in an evening. The story of ‘The Smiler’ really stood out to me and I never forgot it. Years later when dealing with mental health issues, I kept thinking about ‘The Smiler’ and how I was feeling as though I was entering ‘a marriage with nothingness,’ embracing the ‘naked light’ and had a ‘kingdom inside of me that they could not destroy.’ The lyrical content of the song places emphasis on mania and depression and how, when mixed, they can feel as though they are an ‘Entity’ that lives inside of you, influencing your decisions, and you are forced to watch. When you lose control and are unable to reel it back in, you reluctantly lean into the chaos. Self-harm, chaos, and isolation. The cocoon in the video represents the feelings of isolation that come along with these extreme feelings of helplessness, pandemonium, shame, and an irrational and morbid desire to let everything go to shit. Mix this in with being a touring musician and you get the old ‘hellhound on my trail’ nod. But for us, it’s ‘Demon is catching up.’