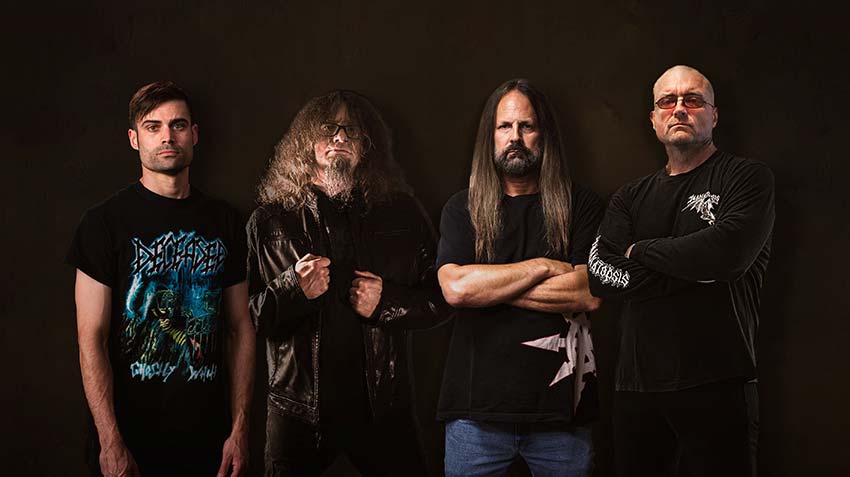 Recently signed to Extreme Metal Music, Oakland’s deadly thrashers Thanatopsis have announced their debut album, ‘Initiation,’ which is set to be unleashed on October 23, 2020 (pre-order: Physical + Digital). The effort follows the band’s independently released demos from 1993-1997.

After a hiatus, 3/4 of the band has reunited along with the new addition of drummer Jason Borton (Jungle Rot, Arkaik) to offer their debut full-length, which features past recordings that are given a second life and a chance to be heard by a broader audience along with new unheard material. The album was recorded at Trident Studios with renowned producer Juan Urteaga (Exodus, Testament, Machine Head).

The overall album experience shares eight old school thrash/death metal influenced tracks that are an emotionally twisted ride of violently catchy brutality. With themes that include corruption, occultism, murder, revolt, and loss of faith, Thanatopsis delivers an album that keeps the listener engaged from start to finish, with a sound unlike any other.

It has been a long time in the making and we are very excited to present to the world the first official full-length Thanatopsis album “Initiation”. This album contains timeless songs that fans, both old and new, will appreciate. Bringing our sound to the masses has been a collective dream of ours for a long time. In a scene that is saturated with bands, we are proud to release something that is unique in character to the metal world at large.

To coincide with the LP’s reveal, the band have dropped the album’s first track in the form of “Embodiment,” which you can check out below.

This is a song that has been demoed a few times in the past, but due to various reasons it has never been done to the band’s satisfaction – until now. While this song is about the personal experience of vocalist John Bishop, it also has content that many can relate to as it describes a search for a faith that uncovers untruth and ends in despair.