Today they have launched the video for “Looking For The Light,” a track which features on both versions of ‘The Absolute Universe.’ Watch it now here:


Mike Portnoy comments: “Looking For The Light is one of the heavier tracks on The Absolute Universe. In the tradition of Transatlantic sharing all lead vocals, this track gave me my showcase to deliver the lead vocals as it called for a bit more of an aggressive approach.

This is one of the few tracks that remains primarily the same and appears on both versions of the album. However not content to keep it simple, the version included on the music video is actually a unique version which combines both “Looking For The Light” and its “Reprise” from later in the album into one combined version available only here in this video.”

Watch the previously released video for ‘The World We Used To Know’ here: https://www.youtube.com/watch?v=xULvfo6rpvE

Watch the previously released video for ‘Overture/Reaching For The Sky’ here: https://youtu.be/SP5HwWbCQvg

Each album will be available on CD, LP & Digitally. But there will also be what has been called ‘The Absolute Universe: The Ultimate Edition’, which collects both versions together in one lavish package that includes 5LP’s, 3CD’s & a Blu-ray that includes a special mix that combines both versions into a third unique version in 5.1 surround sound with visuals and a behind the scenes documentary. All editions have artwork created by Thomas Ewerhard featuring the airship by Pavel Zhovba.

As Mike Portnoy explains: “We’ve got two versions of this album. There is a two CD presentation, which is 90 minutes long, and a single one – that’s 60 minutes. However, the single CD is NOT merely an edited version of the double CD. They each contain alternate versions and even in some cases, new recordings. We wrote fresh lyrics and have different people singing on the single CD version tracks as compared to those on the double CD. Some of the song titles have also been changed, while others might remain the same, but compositionally what you’ll hear has been altered. You must appreciate that what we have done is unique. We revamped the songs to make the two versions different.” Pete Trewavas adds: “We did write some new music for the single CD, what’s more, there are also differences in the instruments used on some of the tracks across the two records.”

The full list of formats is below, and you can pre-order now here: https://transatlantic.lnk.to/TheAbsoluteUniverse 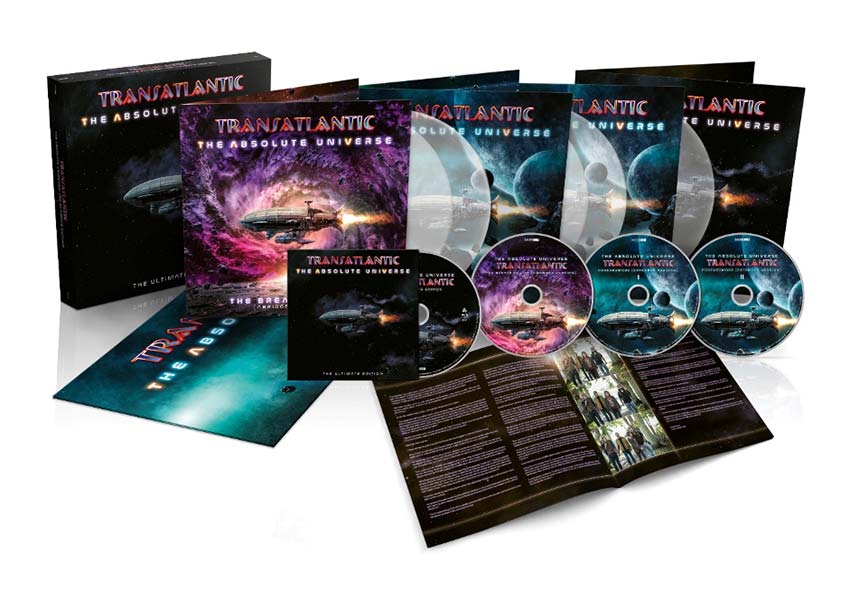 ‘The Absolute Universe: The Ultimate Edition’
(pictured above)

Limited Deluxe Clear 5LP+3CD+Blu-Ray Box-set – contained within a foil-finished lift-off box with extended 16-page LP booklet & 60x60cm poster. Includes both versions of the album over 5LP’s and 3CD’s, plus a Blu-Ray with 5.1 mix & documentary.