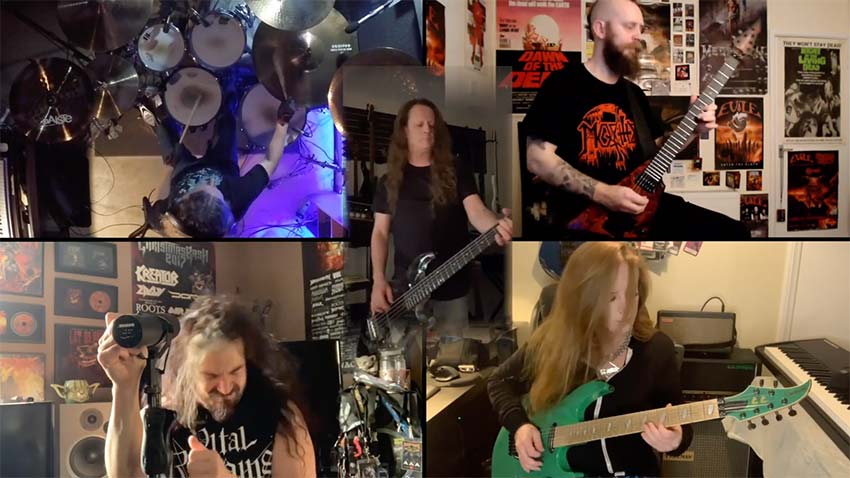 Let Us Prey/Ross the Boss vocalist Marc Lopes has posted a quarantine cover collaboration with an all-star cast via his official YouTube channel. The clip, which you can check out below, sees Lopes joined by guitarists Courtney Cox (The Iron Maidens) and OL Drake (Evile), bassist Jack Gibson (Exodus), and drummer Matt Thompson (King Diamond, Shaolin Death Squad) for an extraordinary cover of the King Diamond classic hit track “A Mansion In Darkness” off 1987’s ‘Abigail.’

“The cover was born out of a conversation between guitarists Courtney Cox (The Iron Maidens) and OL Drake (Evile) about collaborating together on a virtual jam session,” states the official cover collab reveal. “Cox suggested one of her favorite King Diamond songs for the cover, and from there they reached out to bassist Jack Gibson (Exodus) and drummer Matt Thompson (King Diamond).”

The statement continues, “The big question mark was who would handle vocals, to which Cox’s reply was “I know a guy.” Lopes was asked to round out the collaboration and stepped up to the daunting task of delivering his take on the King’s demonic growls and masterful falsetto. The final result according to all parties involved was a “a total blast had by all doing this…for the love of METAL!””

The music video was edited by Abel Hernandez and mixed and mastered by Par Mahn — check it out below.