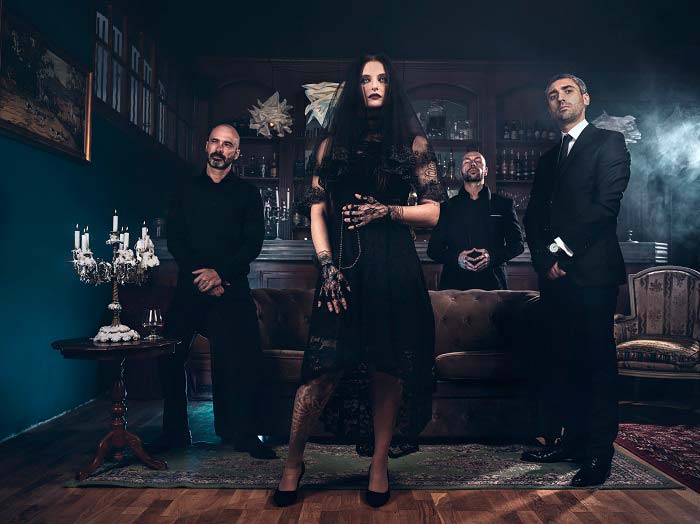 French melodic death metal group Akiavel have officially released their previously teased new video for single “Frozen Beauties” — check out the clip below. The track serves as the first single to come off the band’s recently announced new full-length offering, ‘Væ Victis,’ which comes out on April 23, 2021 (pre-order).


““Væ Victis” is a concept album that explores the darkest and most depraved spaces of the human psyche,” explains a press release. “Further evolving their sound, AKIAVEL takes a radical approach to their musical assault, consuming the listener with dizzying maelstroms of chaos. “Væ Victis” embodies the word “death,” putting forth an intrusive battery of blistering guitars, pummeling drums, and scathing vocals that culminates in one of the most robust death metal records the genre has seen yet.”

Vocalist Auré comments on the impending album: “My writing is quite a ritual! To write Akiavel’s second album it only took a containment, a lot of frustrations, and reports on serial killers…

I’m fascinated by the brains of killers. I wanted to take a closer look at it and I read a lot of books around them. During the confinement the time passed quickly, because I was on the lookout for anything that could touch my subject. As for writing itself, it’s part of my life. I’ve always read and written a lot. I studied literature. I love Molière’s language so much.

When I compose a song, I like to be alone at home. I’m old school so I don’t have a computer. Just a pencil and a white page. A lot of things happen in my head and in my feelings when I decide to write about a subject. For example, when I wrote “COMRADE”, I was so focused on the horrors of Tchikatilo that as soon as I finished, I took my son in my arms, I hugged him very tightly, I kissed him a thousand times, I almost cried…

Depending on the subject, if it touches me too hard sometimes I need a little time before I dive back on another song.”

‘Væ Victis’ will be released on CD with limited edition signed and numbered vinyl pressings, here’s that pre-order link again.

Also Check Out: Ghostbound unveil “And We Are Already At Sea” video