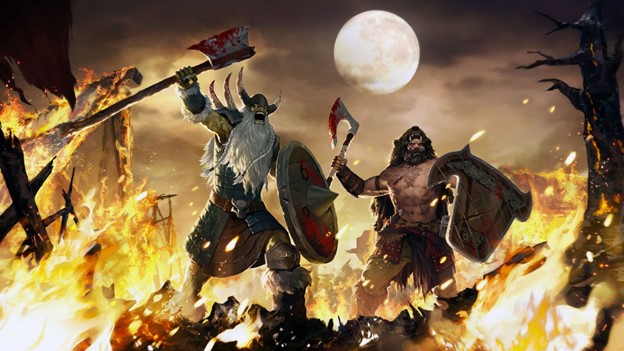 Entitled the “Viking Invasion”, the month-long event takes its broad themes from Iron Maiden’s song, “Invaders”, from 1982’s The Number of the Beast album. Taking a page out of its own (comic) book, ‘Legacy of the Beast’ created a new character and storyline borrowing from Amon Amarth’s latest album, The Berserker.

After a spate of murderous attacks on his village, a lone Beserker vows revenge on the culprits who slaughtered his family. No stranger to battle, retribution or revenge, Eddie, Iron Maiden’s infamous mascot, leads not only the Beserker but also Norse Goddess, Freya, into battle against unrelenting waves of enemies to seek vengeance for the Berserker’s fallen kin. Are these random attacks, or is something more sinister afoot?

Find out when you meet The Berserker in the Viking Invasion Dungeon launching April 13th, 2021 at 5pm PT in ‘Iron Maiden: Legacy of the Beast’ mobile game.

“Legacy of the Beast was built on a foundation of Iron Maiden songs, art and history, but has also always been about introducing and developing creative ideas that extended beyond Maiden,” band Manager Rod Smallwood comments, “and, just as we’ve always invited bands out to tour with us, we are delighted to invite some friends to become part of our game and to provide another dimension to the fun, dexterity and excitement of it.”

In ‘Iron Maiden: Legacy of the Beast,’ metal and RPG gaming fans take on the role of the band’s iconic mascot, Eddie, who travels through time, across a spectacularly diverse array of worlds in captivating 3D environments. Eddie appears in many forms, each a part of Iron Maiden’s rich history, and each with a set of special powers and abilities.

Amon Amarth’s lead vocalist & Viking-in-chief Johan Hegg explains, “To have our own character in the Iron Maiden: Legacy of the Beast game is just insanely cool! And such an honor. We hope everyone will enjoy our humble contribution to this awesome game!”

Over the years, the game has expanded to include 20 dungeons and 6 unique Worlds, from the pits of The Beast’s Hell, ‘Powerslave’s Ancient Egypt, ‘AMOLAD’s World War II to ‘The Final Frontier’ of the far future, hundreds of characters including 90 Eddies based on classic Maiden album and single covers. A vast array of enemies – corrupt Demons (Lucifer, Baphomet), Gods (Horus, Osiris, Odin) and Monsters aplenty, a bloody Player vs Player Battle Arena and a ruthless Gauntlet feature designed to satisfy new players and hardcore long-term players. The latest feature, “Clans”, allows players to join forces with their blood brothers to complete team tasks and face off against monstrous Raid Bosses. All to an in-game soundtrack of over 30 Iron Maiden tracks including – “The Trooper”, “Where Eagles Dare”, “Lord Of Light”, “Aces High” and more. 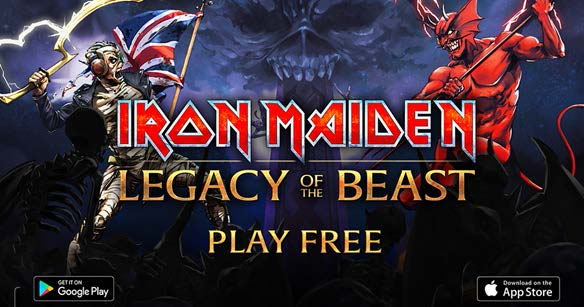 Founded in 2016, Navigator Games is home to a dynamic and enthusiastic team of video game developers based out of Vancouver, Canada. The studio’s mission is to create truly unique and engaging video games that push the boundaries. This talented team is built upon a wealth of experience accumulated from Activision, EA Games, Ubisoft, Microsoft, Disney, GREE, Radical, Hothead, Acronym, Capcom & IUGO. Their main title, Iron Maiden: Legacy of the Beast, will celebrate its 5th Anniversary July 2021!

Iron Maiden: Legacy of the Beast first launched in 2016. Players battle as Eddie, Iron Maiden’s famed undead mascot, in his many forms across amazing worlds inspired by Iron Maiden’s rich imagery and music. Eddie’s quest to gather the pieces of his fragmented soul sees him fighting legions of unrelenting enemies and teaming up with powerful heroes pulled straight from Iron Maiden lore. Iron Maiden is intimately involved in character creation and story content, ensuring everything lives up to the Maiden name and brings their vision to life.

The game also features monthly dungeons and special events where players can participate to earn rare rewards and new characters based on Maiden songs or themes. These have included the demon-infested Infernal Dungeon, Halloween Dungeons such as Dracula’s Castle, and the foreboding Raven’s Altar guarded by the fearsome Raven Witch. November 2020 featured a major event – Limbo of Lost Souls – which launched with Iron Maiden’s latest live album ‘Nights of the Dead “Legacy of the Beast” Live in Mexico City.’ The event featured a Dia de Muertos (Day of the Dead) themed dungeon, and introduced Day of the Dead Eddie, a new character ripped right from the album cover!