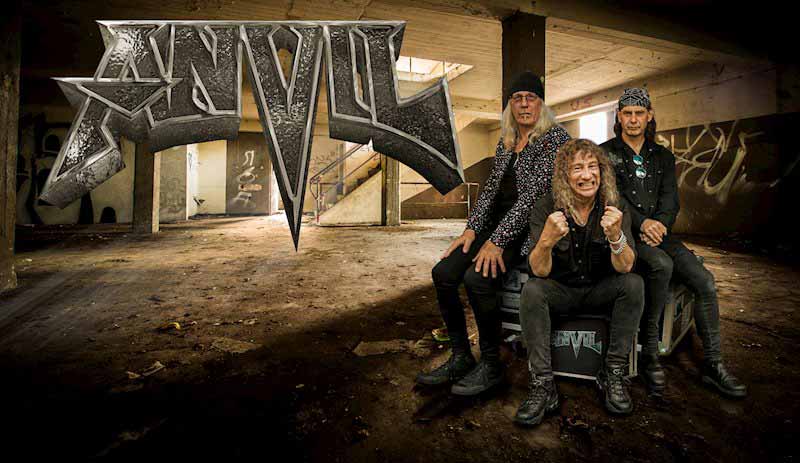 Canadian heavy metal vets Anvil have announced brand new U.S. tour dates for June and July — see all confirmed shows below. The run is in support of the band’s incoming new full-length album titled ‘Impact Is Imminent,’ which officially arrives on May 20th, 2022 via AFM Records (pre-order).

Regarding returning to the stage, guitarist and vocalist Steve “Lips” Kudlow says, “Hell and high water has come and gone now it’s time to rock! It can’t happen soon enough!”

Drummer Robb Reiner comments, “F–K COVID…After 2+yrs away here we come….Looking forward to seeing all you pounders…Let’s make sure to Rock That Shit!”

Here’s more info from the trek reveal, “The Canadian trio belongs to one of the most distinctive bands of their genre, often cited as having influenced notable metal acts such as Slayer, Megadeath, Metallica or Anthrax. After 40 years in the music industry, touring the world in sold-out venues, and garnering critically acclaim for Anvil! The Story Of Anvil – the number #1 music documentary of every metalhead – the iconic band returns with their nineteenth album.”

Speaking on the impending release, they add, “New album “Impact Is Imminent” fires off merciless riff attacks, relentlessly driving drums and impressive bass grooves, complemented by vocal melodies and lyrics that inevitably drill themselves into the listener’s aural tract. As always, Kudlow and founding member and drummer Robb Reiner, are at the epicentre of this heavy metal extravaganza. For the past eight years, they have been supported by bassist Chris Robertson, who not only complements the Anvil fold on a personal level, but also enhances the tracks with his powerful low frequency bass parts and backing vocals.”

Make sure to check out new video single dubbed “Ghost Shadow” after the tour dates below.