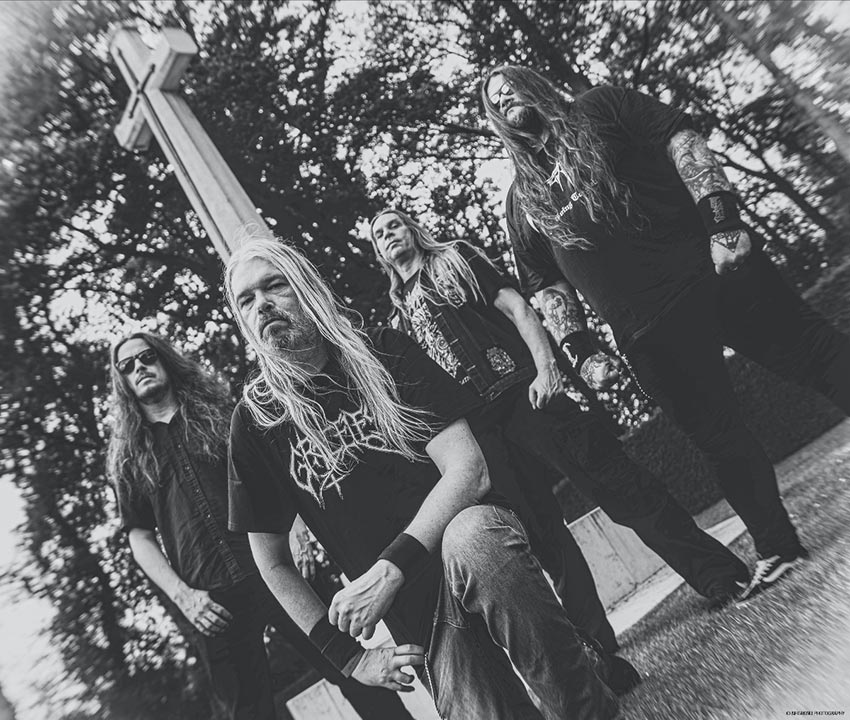 Dutch death/doom metal warriors Asphyx have released an official video for their new song dubbed “The Nameless Elite” which appears on the band’s soon-to-drop tenth full-length album titled ‘Necroceros’ (out on January 22, 2021 via Century Media Records; pre-order). The video was created by Maurice Swinkels/Younique Film (Legion of the Damned, Exodus, Kataklysm + more); stream it below.

Frontman Martin van Drunen comments, “This third single of our forthcoming Necroceros album is entitled ‘The Nameless Elite’ and is about modern-day warfare, especially about the brave men and women in the many international elite units that combat any form of terror to protect us all against violent acts of insanity. We thought the location at the Overloon War Museum was a fantastic one to shoot a video for any kind of song dealing about war and the Sherman tank in the clip actually did serve during WWII on the battlefields in that area. It may not be directly related to the content of the track, but Asphyx is a band that has always and will always take on any subject concerning war, without glorifying it. War is Hell.”

Martin adds, “We would very much like to thank the wonderful cooperative people of the Overloon War Museum in The Netherlands for giving us permission to shoot there, causing pleasant chaos with our noise and smoke!”

“Necroceros was recorded at Tom Meier Studio as well as at Paul Baayens’ The Mörserstudio, and then finally mixed/mastered by Sebastian “Seeb” Levermann at Greenman Studios,” notes a press release. “The album features cover art by Axel Hermann.”


In addition, Asphyx have announced a special and free live streaming event to be held on Saturday, January 23rd at the Metropool venue in Hengelo, The Netherlands. The virtual gig will celebrate the unleashing of ‘Necroceros’ and will be accessible through the club’s website and their online outlets. “The concert will start at 9 PM CET, but check HERE and HERE for your local time info and further details,” states the presser. Watch a teaser clip below.