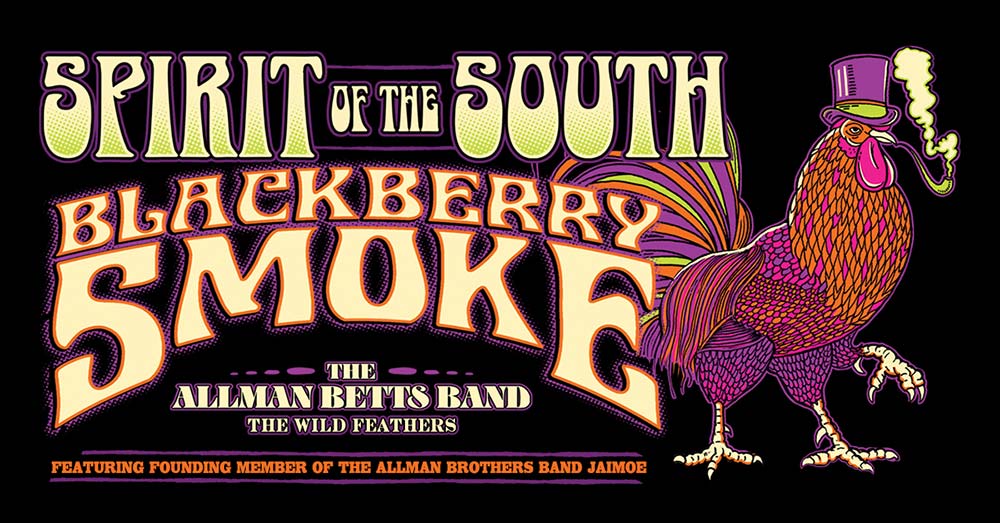 Southern rockers Blackberry Smoke are getting ready to embark on their ‘Spirit of the South Tour: A Celebration of Southern Rock and Roll’ this summer. The lengthy trek sees support from The Allman Betts Band, The Wild Feathers and Jaimoe (The Allman Brothers Band).

Fresh stops have been added to the journey, including gigs in NYC, NJ, CT and more. Tickets for the shows go on-sale this Friday, March 6 at 10:00am local time. See below for all upcoming tour dates.

We are beyond excited to bring our Spirit Of The South tour to fans this summer. If you think of this music as a genre and you step back far enough to see the scope of what a handful of bands from the South were able to accomplish, it’s pretty damn staggering. All without giving a damn about what was hip or trendy at the time. It’s music that is a part of the fabric of people’s lives…music that we all love and cherish deeply. On this tour we’d like to celebrate the musical freedom championed by those pioneers and maybe help tell the story. It’s not only what people think of as Southern Rock, but all the elements in Rock and Roll that make it Southern. It’s blues, gospel, soul, jazz and bluegrass…everything that took root in the South and spread all over the world. We feel this tour is going to give us all a unique opportunity for something really special. I think everyone will love the Celebration!

I’ve been knowing the Blackberry cats a couple decades, we come up in the same circuit. This tour is going to be special, the sweet warm summer nights and the epic jams at the end. Can’t f***ing wait!

In more news, Blackberry Smoke recently returned to the studio with producer Dave Cobb to begin work on their next album, which includes a new song with singer-songwriter Jamey Johnson.

May 8—Maryville, TN—The Shed (SOLD OUT)

May 9—Maryville, TN—The Shed (SOLD OUT)

*with the North Mississippi Allstars

†“Spirit Of The South Tour” with special guests Allman Betts Band, The Wild Feathers and Jaimoe