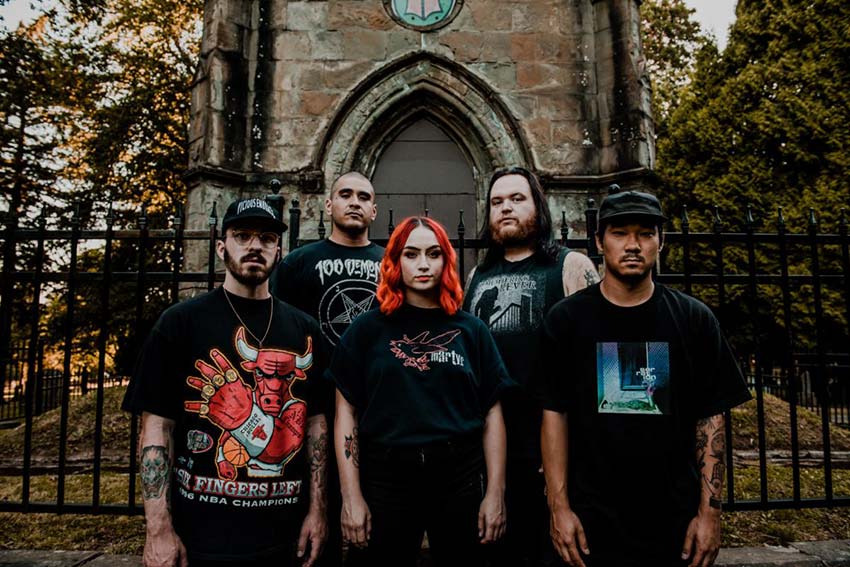 Dying Wish is the Portland-based blistering hardcore five-piece whose passionate music fuses New Wave of American Heavy Metal and chaos-driven punk noises. Today, they have announced their signing to SharpTone Records. In support of today’s announce, the band has released a new single, “Innate Thirst.” Fans can watch the video [below], as well as listen to the single across streaming services including Spotify, Apple Music, and more.

Additionally, the band has announced the release of a 7-inch due out November 13, 2020. It will feature both “Innate Thirst,” as well as a new version of “Enemies in Red” featuring Bryan Garris of Knocked Loose. Pre-orders are available now here.

On signing to SharpTone, lead vocalist Emma Boster shares, “We are very excited to have signed to SharpTone. From the beginning this label has shown us that they truly believe in us and what we can do. As a newer band, it’s cool to see a label that’s home to some of our inspiration in Bleeding Through, choose to invest a lot in us. Even with the stress of COVID-19 impacting the music industry this year, they have not slowed their momentum on our deal or on our plans to record our debut LP.”

She continues on about the new single, “‘Innate Thirst’ is written about people co-opting subcultures or movements to gain social status or wealth. With the recent uprisings following the death of George Floyd, our hometown of Portland has seen many people that seek to appoint themselves as “leaders” of the Portland movement. Time and time again, these people get exposed for taking advantage of others’ pain and suffering to make a profit and form social status. This can also be applied to our subculture within the hardcore scene. Many newcomers see the scene as an opportunity to achieve popularity instead of becoming truly involved and contributing to the community.”

Dying Wish is the unrelenting and unforgiving sound of struggle, who carries on the tradition of a subculture that serves as inspiration and rallying cry for justice. Equality, dignity, and self-determination are enduring themes in this music, a spirit more vital than ever. Invisible Oranges described the first demo as “joyous, unflinching violence.”

In less than two years after their formation, Dying Wish was anointed by the extreme metal press as one of “5 Bands You Need To Know” (Revolver) and a “Band To Watch In 2020” (Dead Press), as well as secured a coveted spot on Brooklyn Vegan’s Metal Albums “We’re Anticipating In 2020.”

Decimating stages alongside likeminded bands (including Terror, Comeback Kid, and Jesus Piece) Dying Wish is part of a resurgence in postmodern noisecore, mentioned in the same breath as groups like Code Orange and their friends in Knocked Loose. Following successful tours with Counterparts and SeeYouSpaceCowboy, Dying Wish hunkered down in their native Portland, Oregon, to compose their debut full-length for SharpTone Records.

Dying Wish align themselves with the continuing battle for liberation, encompassing the issues affecting BIPOC, the environment, policing, and more intersectional causes while dealing in personal tribulation and trauma in equal measure. They make music aimed at unity but without compromise. Abolition, revolution, and liberation, in spirit and song, is the heart of Dying Wish.