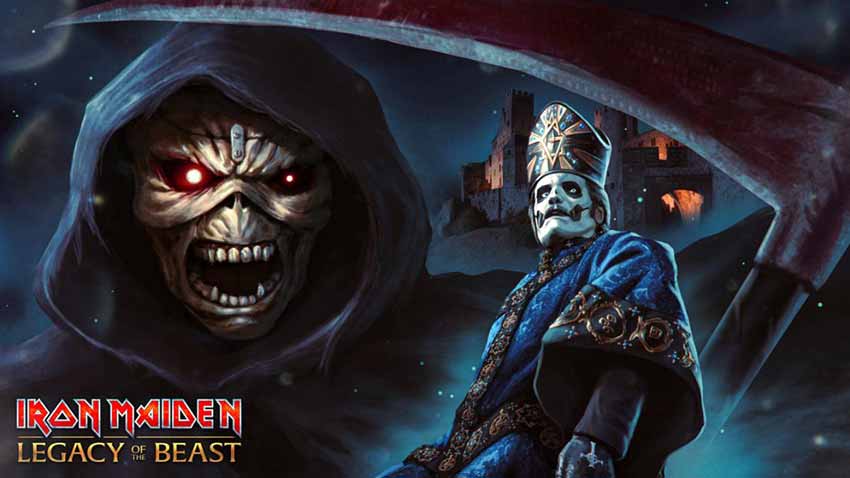 Swedish heavy rockers Ghost have revealed their collaboration with Iron Maiden and their free-to-play mobile game, ‘Legacy of the Beast.’

They add, “The game’s Mascarade Diabolique event is an ode to both bands’ lore taking its broad themes from the cover of Iron Maiden’s 2003 album “Dance of Death” and the video for Ghost’s 2018 song, ‘Dance Macabre,’. In this new storyline, Eddie and Papa Emeritus IV are both invited to a mysterious party in Transylvania (taken from the intro to A Dance Macabre & also surely a nod to the first Maiden instrumental track of the same name on their debut album!) They soon discover that things are getting out of hand, even faster than usual, as a sinister force has mastered the power to mimic the un-bindable will of the sentient powers of free will and individuality, in an effort to bind them to its control. Together they must fight through the hordes of mind-controlled revelers to confront the corrupted mimic, Cardinal Immortus, an evil clone of Papa Emeritus.”

Ghost’s lead vocalist Tobias Forge comments on the collab, “Joy that it’s actually happening.” And continued: “I’m happy to see that my creature is being led into [Maiden’s] world. That is a cool thing, both very humbling and flattering.”

“It’s great that the LOTB mobile game continues to innovate”, adds band manager, Rod Smallwood. “The introduction of other great band images and characters is a great evolution of the initial idea we had for Eddie’s gaming universe over 5 years ago. To have our friends, Ghost bring Papa Emeritus IV into a dungeon feels like the culmination of a relationship dating back to 2013 when the band first came with us to South America. With more slots on the Maiden England Tour in ’14 and then a proper run with us throughout North America on the 2017 The Book of Souls Tour we got to know that our fans appreciated seeing them and that they’d always be welcome with us on the road. I’m sure Eddie will help Papa cause some serious mayhem together and that’s what it’s all about!”

Check out a promo clip below:

Here’s more info from the presser:

In Iron Maiden: Legacy of the Beast, metal and RPG gaming fans take on the role of the band’s iconic mascot, Eddie who travels across a spectacularly diverse array of worlds by traveling through time in captivating 3D environments. Eddie appears in many forms, each a part of Iron Maiden’s rich history, and each with a set of special powers and abilities.

Over the years the game has expanded to include 20 dungeons and 6 unique Worlds, from the pits of Hell, Ancient Egypt, World War II to the far future, hundreds of characters including 90 Eddies based on classic Maiden album covers. A vast array of enemies – corrupt Demons (Lucifer, Baphomet), Gods (Horus, Osiris, Odin) and Monsters, a bloody Player vs Player Battle Arena and a ruthless Gauntlet feature designed to satisfy new players and hardcore long term players. The latest feature ‘Clans’ allows players to join forces with their blood brothers to complete team tasks and face off against monstrous Raid Bosses. All to an in-game soundtrack of over 30 Iron Maiden tracks including – The Trooper, Where Eagles Dare, Aces High and more.