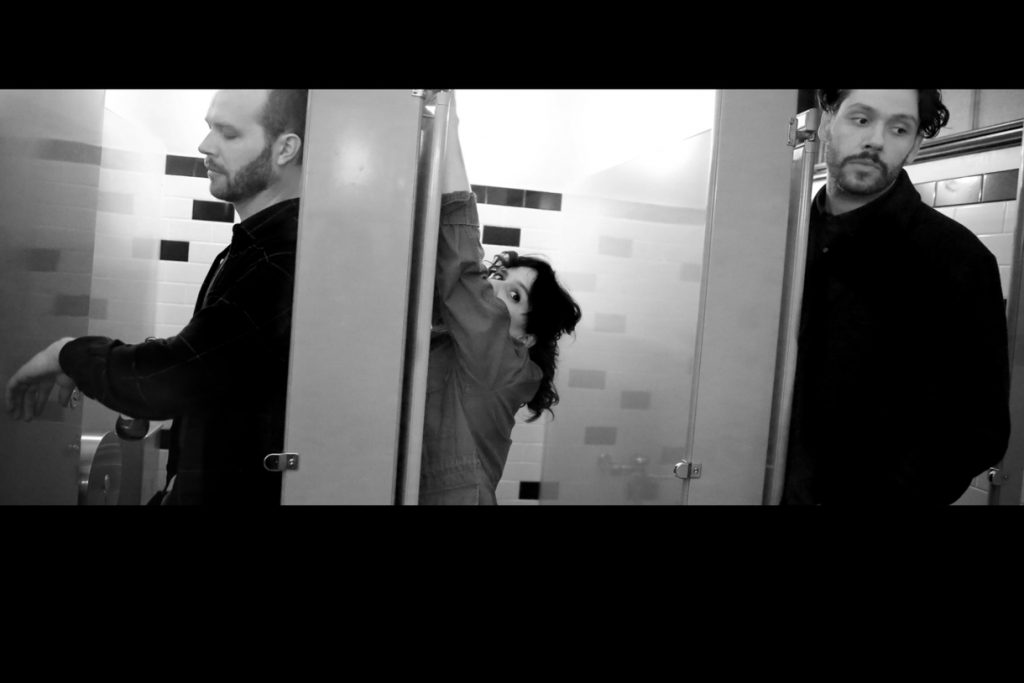 Gold Dime’s new album My House is out now via Fire Talk Records (order). About the album Brooklyn Vegan says, “The record covers a lot of ground, with rippers in the long-running tradition of NYC noise rock, discordant slow-burners, avant-garde pieces, and more. There’s some real out-there stuff, and there’s also some very catchy stuff. From her clattering drums to her soaring, piercing voice, Andrya is the star of the show, but her collaborators are no slouches and Gold Dime really come off like a tight power trio on this album. And John Bohannon’s guitar soundscapes, which totally defy the typical limitations of a guitar, are no small part of what makes this album great.”

Gold Dime’s spring tour will kick off on March 6 in Kingston, NY. The upcoming tour will include shows in Austin, TX for SXSW and performances in Atlanta, Nashville, Washington, D.C. and more. All upcoming shows are listed below. Recent addition Brendan Winick will be joining the band on guitar for their upcoming tour.

While previous iterations of Gold Dime featured something of a revolving door of collaborators, and were pretty much under Andrya Ambro’s direction, entirely, My House sees a new, more collective effort, with Ian Douglas-Moore on bass and John Bohannon (Ancient Ocean || J.R. Bohannon) on guitar.

Coming from her previous, highly acclaimed noisy rock duo Talk Normal, Gold Dime’s first release, 2017’s Nerves, was the first time Ambro has had no one to answer to but herself. “I can be a control freak,” she notes. After Talk Normal, I was like fine, I’ll do everything, for my own independence and perhaps a desire to just, well, control things.”

This is much less the case with My House. Produced by Ambro and recorded/mixed by Ernie Indradat, the wildly dynamic sound with which the [new] trio plays is immediately recognizable as the work of more than one mind connecting with each other. Recorded in stages throughout 2018, the album is 8 new tracks, some written by Ambro alone, some an amalgamation of the band.

These songs ebb and flow, each song an epic poem in and of itself. Though dutied with drums in a live setting, and though she plays them damn well, Andrya Ambro’s vocal prowess is at the core of everything, whether at hushed moments of emotive tension or intense and incensed wails that echo what it means to feel everything. Pained “ooh’s” at the peak moments of “Hindsight II,” and the most human lyrics like, “I want to understand each other,” are but singular moments in an overall staggering upheaval of comfortability and norms.

As for Ambro’s production, it has always resisted pigeonholing. Walking a tightrope between unapologetic art rock and disarming intimacy, she integrates triumphant doubled guitars whose distorted fuzz winks at the mayhem of Les Rallizes Denudes, deep floor toms that quick pivot to galvanizing beats on a bed of dead spinning cymbals, to sometimes spoken, sometimes sung Laurie Anderson-esque words that uplift into a many voiced choir. And the warm bass lines, well they would make Holger Czukay from CAN very proud.

My House, according to Ambro, is intended to be something of a gruff father’s declaration at dinner, fist slamming on the table, but rather than the stubborn, undying manners that would come with “living under my roof,” she only demands that everything be done with the same degree of tireless dedication and authenticity. “I want every beat to be played with intention. ‘Cause why play if you don’t mean it?” Every moment of this album acts as just that—a demand to own something, whether it be self or art or place in this world. We have no choice but to listen, to respect it. This is her house… well Gold Dime’s house.