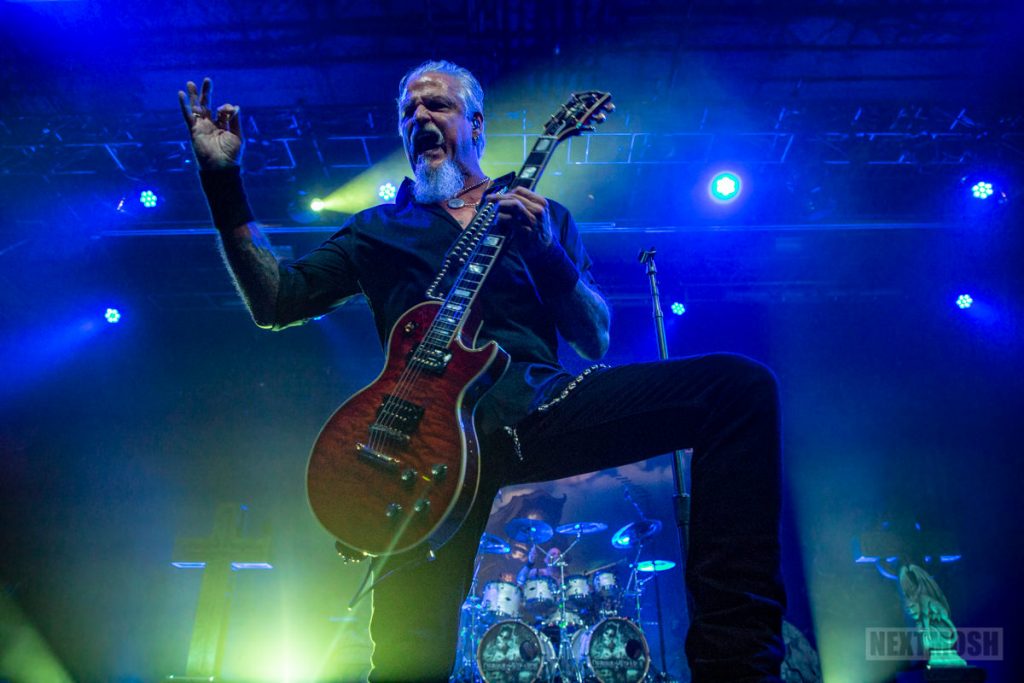 UPDATE: The U.S. Department of Justice has made available a ‘Statement of Facts’ document which shows the below photo collage depicting Schaffer wielding ‘bear spray.’ As per the document:

SCHAFFER was among the rioters who sprayed United States Capitol Police officers with “bear spray,” a form of capsaicin pepper spray sold by many outdoors retailers, as part of their efforts to push the officers back inside the Capitol and breach the Capitol Building themselves. SCHAFFER was photographed and captured on surveillance video carrying “bear spray” and engaging in verbal altercations with Capitol Police officers inside the Capitol Building. SCHAFFER is seen holding a clear sunglasses in one photograph, and bear spray in other photographs.

The photographs show SCHAFFER in a blue hooded sweatshirt under a tactical vest with a baseball cap that reads “Oath Keepers Lifetime Member.” The “Oath Keepers” is an organization that characterizes itself as a militia of former law enforcement and military personnel and has often, as a group, urged President Trump to declare Martial Law in order to prevent the Congress from certifying the Electoral College Results.

UPDATE: FBI Indianapolis have confirmed that Jon Schaffer is in custody, they tweeted:

Jon Schaffer, Columbus, IN, has been arrested in connection to Jan 6 incident at the U.S. Capitol. Schaffer faces 6 charges including engaging in an act of physical violence in a Capitol building. Schaffer was allegedly among rioters who sprayed Capitol police with “bear spray.”

Jon Schaffer, Columbus, IN, has been arrested in connection to Jan 6 incident at the U.S. Capitol. Schaffer faces 6 charges including engaging in an act of physical violence in a Capitol building. Schaffer was allegedly among rioters who sprayed Capitol police with “bear spray.”

Indiana-based news outlet WISH-TV are reporting that Iced Earth founder and guitarist Jon Schaffer has been detained for his alleged role in last week’s storming and failed coup attempt against the U.S. Capitol building.

WISH-TV noted, “The musician from Columbus, Indiana, turned himself in to authorities around 3 p.m. Sunday, the FBI confirms.”

On the evening of the Capitol building protest (January 6th), news quickly spread of a photo taken by Getty Images photographer Roberto Schmidt that portrayed Schaffer among those who had infiltrated the U.S. Capitol. Shortly after, said Getty image was featured on the FBI’s ‘most wanted’ list of people of interest in connection with the riot.

We want to thank those of you who have sent words of support in recent days. Some of you have been concerned by our silence, which we understand. We needed some time to properly process the information and find out some facts before we made a statement.

First and foremost we absolutely DO NOT condone nor do we support riots or the acts of violence that the rioters were involved in on January 6th at the US Capitol building. We hope that all those involved that day are brought to justice to be investigated and answer for their actions.

With broken hearts we are sending our love and compassion to everyone who has felt pain from the events on January 6th. We are deeply saddened and our hearts go out to the families of the lives lost that day. There are really no proper words to console. Just know we are with you in your shock, grief and pain. Much love to you all.

On January 11th, Block clarified his stance on the Capitol riot after being accused of supporting the attempted overthrow. He noted:

First I want to thank everyone for the amazing support you have shown. Unfortunately It has come to my attention in recent days about a screenshot someone made. There were some very obsessive hateful people posting the screenshot that I did have to remove from my social media. I do want to extend my apologies for the poor way I worded two Facebook posts on January the 6th. I’m human and I make mistakes. My wording was absolutely misunderstood and not properly thought out on my part and I know people and media can interpret things differently. At that moment I saw a historical thing happening that perhaps would cause divide amongst people everywhere so I sent love out to everyone as well. I quickly took the post down after I realized that the post I put up with good intentions to encourage discussion about what was happening at that moment was severely misinterpreted by some. This was all happening before I found out about the horrible line that was crossed that day by protesters. I also carelessly misread a comment someone posted on my official Facebook page and replied incorrectly and for that I am sorry. I was in the heat of the moment. In the post, the commenter said: “Are you condemning what happened today Stu?” I replied: “and where in my statement would you get that impression?” In the craziness of responding to so many comments, some very hateful in nature which were also coming at me in rapid fire, I read the word as “condoning” which I DO NOT!! I see that this inaccurate misinterpreted screenshot has been shared on various social media pages and I want to go on record to say this AGAIN:

I absolutely DO NOT condone nor do I support ANY acts of violence or anything else that ANY protester or rioter was involved in on January 6th at the US Capitol building.

If you follow me, you know I am generally a man of Peace, Kitties and Music. I do believe in peaceful protest and expressing your grievances, I believe in questioning authority when it’s appropriate, but I also believe that it should be done in a peaceful, respectful and intellectual manner and within the confines of the law. Again I apologize for any confusion. That’s it that’s all. I have been and will be taking a social media break and this is the only time I will ever address this inaccurate misinterpreted screenshot. Much Love and Stay Strong. ❤️

As Blabbermouth reported, German daily newspaper Die Welt uploaded a video interview they conducted with Schaffer last November at a Washington, D.C. pro-Trump rally. In the two-minute video, Schaffer claimed that “a group of thugs and criminals hijacked this country a long time ago” and that they’re “messing with the wrong people.” You can read the full transcript below.

My name is Jon Schaffer. I’m from Indiana. A group of thugs and criminals hijacked this country a long time ago. Now they’re making their big move, and it’s not gonna happen. And that’s what it is. These are globalists. These are the scum of the earth. These are the criminals that are behind all the fraudulent fee on currency, they’re behind all the wars, they’re behind all the shit, they’re behind divide-and-conquer tactics, behind the racial divide. It’s all nonsense, it’s all garbage. People need to wake up and snap out of the matrix, because they’re going down. They’ve made the move. They’re messing with the wrong people here — trust me on that. And we needed it to be open like this — open fraud, open theft. Because now we see you, and you’re going down. Mark my words.

When asked if he was expecting violence or clashing of groups at the November event, Schaffer stated:

If somebody wants to bring violence, I think there’s a lot of us here that are ready for it. We don’t want that, but if they bring it, we’re gonna respond to that — trust me.

In the same interview, Schaffer added:

I think this goes beyond President Trump. President Trump is a populist. He’s not your typical Republican. He’s not establishment. He’s not going out starting wars all over the place, like they do. Which is funny—where are all the Democrats that were anti-war? There’s so much hatred for Trump, it’s just ridiculous. He’s dealing with a criminal mafia that has been in the shadows running the world, frankly, for a very long time.

They wanna destroy all of our sovereignty and bring about global government. We’re not having it. We can still do business together, the countries can still be at peace, but we’re not gonna merge into some globalist, communist system. It will not happen. There will be a lot of blood shed, if it comes down to that—trust me. The American people will not go for that bullshit once they understand what’s actually happening. So, that’s where we’re at. Nobody wants this, but they’re pushing us to a point where we have no choice.

This story is developing…