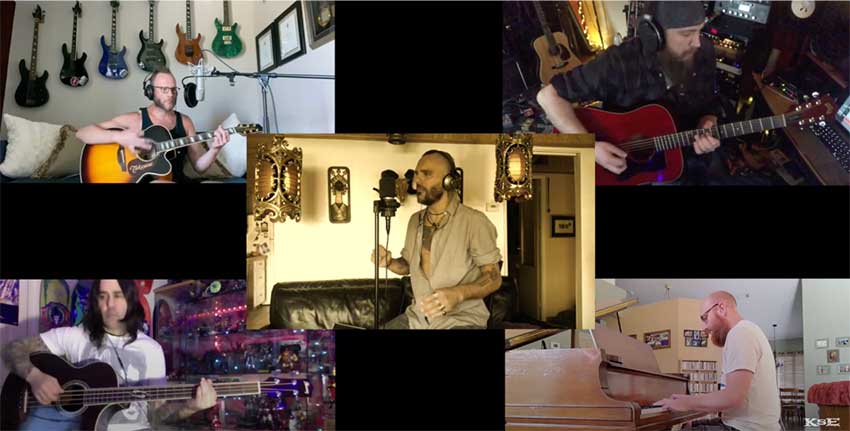 Killswitch Engage – Adam Dutkiewicz [guitar], Joel Stroetzel [guitar], Mike D’Antonio [bass], Justin Foley [drums], and Jesse Leach [vocals] – have released a live performance video of an acoustic version of the song “We Carry On.” The track was recorded while the members were in quarantine. The original appears on the band’s 2016-released album ‘Incarnate.’


As Adam D. says in the intro of the video, the band had planned to perform this song during the now-postponed Spring 2020 Atonement Tour, featuring August Burns Red and Light The Torch. The tour was paused after only a few shows in March due to the COVID-19 shutdown. The rescheduled dates will be announced soon.

“This song is a deep one for me,” explains Leach. “When I wrote the lyrics, it was originally based off of struggles in a tumultuous, abusive relationship. Little did I know how significant it would eventually be as it has relevance during this strange time of quarantine and uncertainty. For me, it has turned into an anthem, of sorts, about perseverance. While working on this version, it really struck me how much I felt the lyrics in a different light. As dark and difficult as things can get, we all have this inner power to persevere and pull through. I feel that the desperation and the melancholy of this song are balanced by a ray of hope that runs through it all.”

The band has also created Killswitch Engage-branded face masks for fans, which are available on their web store at this location: https://killswitchengage.merchcentral.com

All profits from sales of these face masks will be donated to NIVA (National Independent Venue Association). The organization is working to help preserve independent venues across the country that are struggling during the COVID-19 crisis. Learn more about their efforts here: https://www.saveourstages.com/

“We decided that it’s a good opportunity to bring some awareness and support to an important non-profit organization called NIVA,” Leach explains. “All of us started out in small ‘Mom and Pop’ venues and it would be an absolute shame to see some of these venues go away due to this crisis. I still frequent small clubs when I am home to see shows and stay in touch with the local scenes. Independent venues are the backbone of creativity, art, and music.”

He finishes, “When this is all said and done, I am certain people will be clamoring to see live music. I know I will! So where would we be if these venues go belly up due to lack of support and funding?!”

The release features six songs from the recording sessions for Killswitch Engage’s 2019-released and Grammy-nominated album Atonement, out now via Metal Blade Records. The track-listing is below.

Atonement II B-Sides For Charity track-listing:
1. To The Great Beyond
2. Hollow Convictions
3. Killing of Leviathan
4. No Devotion
5. I Feel Alive Again
6. Prophets of Treason