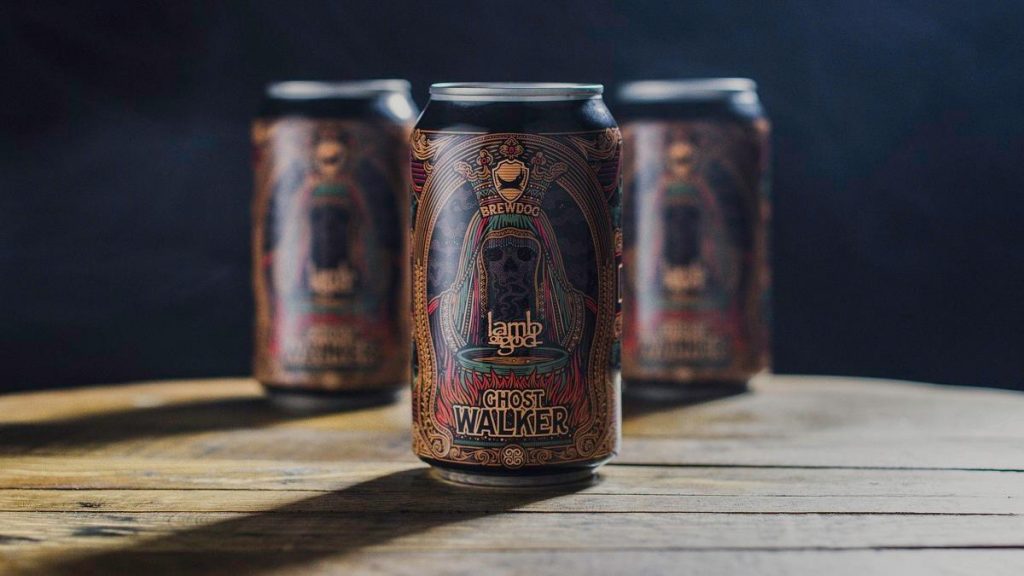 Scottish craft brewer BrewDog and American heavy metal band LAMB OF GOD announce the release of the world’s first non-alcoholic collaboration beer, Ghost Walker. The announcement was originally planned for the start of the band’s global tour that would have begun this spring, but, as a result of COVID-19 and the postponing of their European tour, BrewDog and LAMB OF GOD decided to launch their collaboration with the video premiere of the band’s most recent live performance of their song “Ghost Walking.” The live video, filmed at LAMB OF GOD’s performance at House of Vans in Chicago on February 14, premiered online today, April 14, to give music fans around the world an opportunity to virtually come together in these uncertain times.

As of today, the beer is available in BrewDog’s online shop for shipping anywhere in the world. The beer is named after one of the band’s most popular songs, “Ghost Walking,” from their 2012 album Resolution. LAMB OF GOD vocalist Randy Blythe wrote the lyrics as he started his journey toward an alcohol-free lifestyle.

The collaboration, which started after Blythe was blown away by one of BrewDog’s AF (alcohol free) beers, provides non-drinkers, and people who may want a beer but not the alcohol, a quality craft beverage option. Unlike many non-alcoholic beers, Ghost Walker rocks a hop-forward flavor with less than 0.5% alcohol. Tropical aromas harmonize with grassy, pine notes, all sitting on a solid malt baseline, proving that non-alcoholic beer can taste just as good.

Later this year, after the quarantine is lifted, Ghost Walker will be available to concert-goers attending LAMB OF GOD shows in North America and Europe. At these events, the beer will provide a non-alcoholic alternative for those seeking it and will make these already momentous celebrations even more inclusive. Tour dates and details will be announced on LAMB OF GOD and BrewDog’s websites once determined.

Watch the world premiere of LAMB OF GOD performing “Ghost Walking” live from House of Vans Chicago at lambofgodbeer.com.


LAMB OF GOD vocalist Randy Blythe commented, “The idea of a collaboration hatched when Willie Adler and I visited a BrewDog bar in Columbus on a tour day off to sample a few pints of their non-alcoholic beer with the brewery team. Countless bands have done beer collaborations, but we are the world’s first non-alcoholic one. In my not-so-humble opinion, this is the best non-alcoholic beer ever made, PERIOD. It was conceived, designed and first tasted while on tour – music drove it into existence. Right now is a strange time for everyone, but we’re stoked to provide a non-alcoholic option for those who want to have a brew while cranking some tunes safely at home. We hope you enjoy our performance and we will see you on the road as soon as possible.”

BrewDog co-founder James Watt commented, “This collaboration is our most epic to date. It is also one of the most important, especially now. BrewDog has always been focused on making other people as passionate about craft beer as we are, and that includes people who, like Randy, don’t want alcohol in their beer. Our AF line of beers offers everyone an alcohol-free alternative for any occasion and we’re thrilled to add Ghost Walker to the lineup.”

To learn more about BrewDog’s Ghost Walker beer or to purchase, visit BrewDog.com/usa/ghost-walker.