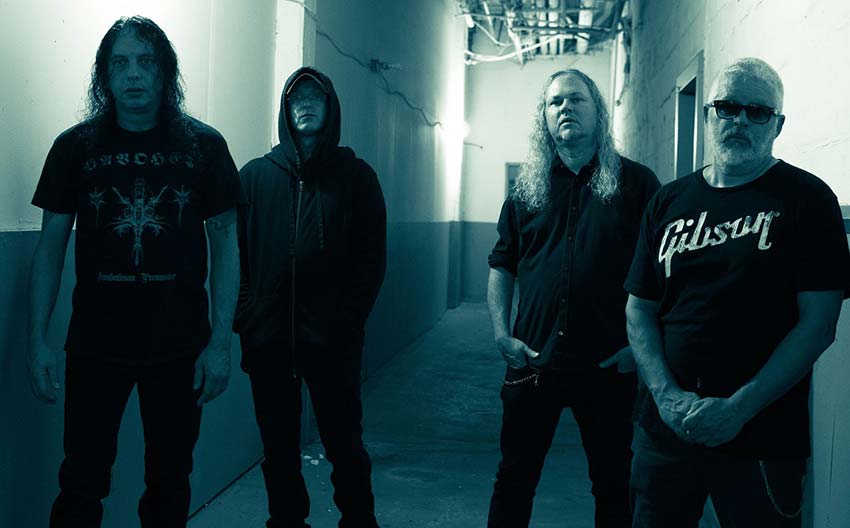 Shadows is a new dark avant-garde metal band from Immolation and ex-Goreaphobia guitarist Alex Bouks, who brought other former Goreaphobia members to the table, including Henny Piotrowski (guitars) and Jake G (vocals). Alongside multi-instrumentalist Lance Walter, the US-based quartet has signed a record deal with Agonia Records, with plans to release their debut material in 2021.

As founding member of the Philadelphia death metal band Goreaphobia, Alex Bouks has been involved in the extreme underground music scene since the late 80’s. His technical style of aggressive, melodic guitar work has resulted in worldwide recognition being a member of such acclaimed acts as Immolation, Incantation, Master, Ruinous and Funebrarum. Now Alex has returned to his musical roots in Shadows, with classic influences (feat. Pink Floyd, Celtic Frost, Sisters of Mercy, Black Sabbath, Mercyful Fate or Voivod) and musicians he always felt chemistry with, including Henry Piotrkowski and Jake G of the split-up Philadelphia-based band Goreaphobia, and Lance Walter of another Philadelphia unit, Dominance. Their debut EP was produced at Rhawn Street Studios in the US and mastered by Tore Stjerna (Mayhem, Watain) at Necromorbus Studio in Sweden. It’s expected to be released in 2021.

A statement from Alex Bouks explains more: “Shadows is a personal project that has lasted with myself and Henny Piotrowski for over thirty years. He is one of the first people I started playing music with and there has always been a magical chemistry that had never gone away. This year the universe spoke and said the truth shall be unveiled.”