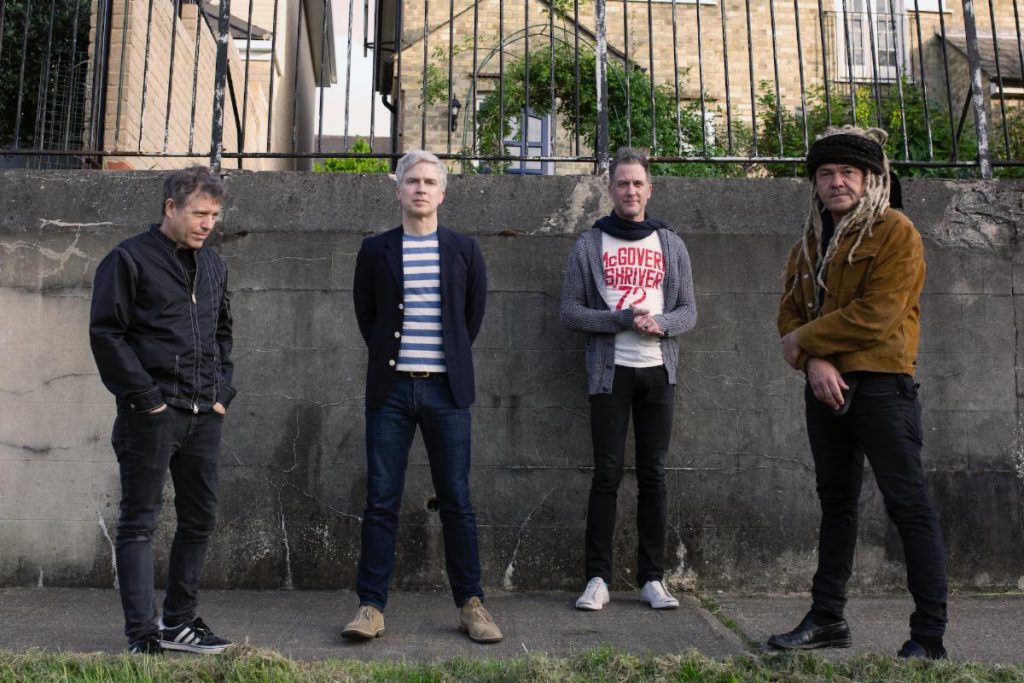 Today, Nada Surf has released a new video for “So Much Love” from their new LP, NEVER NOT TOGETHER (out now via Barsuk). The video was directed by Michael Arthur, and it’s now available to stream below. “Since we had only a few days to make the video for ‘So Much Love,’ we tried to keep it simple, focussing on the band, alone in the dark and gradually expanding the vision to a cosmic sense of love and hope,” Arthur said. “We went in not really knowing what we were doing, but staying open to the idea of this expansive love and the collaborative spirit of all involved.”

The release of NEVER NOT TOGETHER will be followed by extensive worldwide touring. Having just wrapped the first leg of their U.S. tour dates, the tour will resume tonight in Cambridge, UK. The second leg of the U.S. tour will pick up in May. See below for the full tour itinerary, and for complete tour details and ticket information, please visit www.nadasurf.com.

The band is also excited to announce the “So Much Love” fan video contest in partnership with Fender Guitars, open to anyone who wants to make their own “So Much Love” music video, expressing what the song means to them. Interested directors can download hi-resolution audio HERE.

“I’ve described this song so many different ways,” recalls Matthew Caws. “It’s about good will between people, it’s about our ability to find positivity even while in difficult circumstances, about seeing beauty everywhere by working to reframe our judgement. We’re good at feeling good and we’re good at feeling bad and we can spend a lifetime navigating that. All this is why it would be so exciting for us to see your interpretation of the song!”

The band will select one entry as the winning video and promote that video via their socials and web site. In addition, the winner will receive a Fender Player Telecaster from Fender Guitars and a selection of merchandise and vinyl from Nada Surf. Fans and video makers interested in submitting their work must post their finished video on YouTube on or before April 30th with the hashtag #SoMuchLove.

“I’ve always believed that how someone hears a song is just as valid as what the writer was feeling when they wrote it,” says Caws. “If it makes you want to make something, please do, we’d be thrilled!”

NEVER NOT TOGETHER is the band’s ninth studio recording — their first in almost four years — and it received significant praise ahead of its release. After the release of album standout “So Much Love,” Rolling Stone proclaimed it “a driving, elegant song about being constantly blown away by the way the passing beauty of everyday life can help free up a heavy mind,” and praised its “sun-through-clouds loveliness.” MOJO shared similar sentiments in their four-star review, saying that the album “feels like an old friend open to new tricks. Familiar bittersweet flavours are sensitively tweaked but Nada Surf’s cathartic heartbursts remains in perfect harmony.” NPR also included the album in today’s “New Music Friday” column, saying that “Matthew Caws’ songs all carry the values of somebody who is a seeker and looking for connection and warmth in the world and, at the same time, such a tight band and so the songs just have this big, chimey, grandiose, ultra catchy quality that continues to this day completely uninterrupted. Another terrific record.”

NEVER NOT TOGETHER sees Nada Surf – Matthew Caws, Daniel Lorca, Ira Elliot, and their longtime friend and collaborator, Louie Lino – continuing to pursue their humanistic vision of the world through hooky, catchy rock songs with sharply drawn, yet tenderly felt, lyrics. Recorded earlier this year at the legendary Rockfield Studios in Monmouthshire, Wales, the wide-ranging collection revels in the group’s ability to evoke and reflect grand and intricately wrought emotions, whether through sweeping guitar solos or hushed-whisper vocals. Songs like the spectacular “Looking For You” and the shimmering mid-tempo “Just Wait” are empathetic, warm, and powerfully urgent, marked by Caws’ ongoing lyrical quest for 21st century love and connection.

“We’re all together, and that’s just the way it is, and the way it always will be,” says Caws. “That’s the sacred truth of it.”
NADA SURF
WORLD TOUR 2020