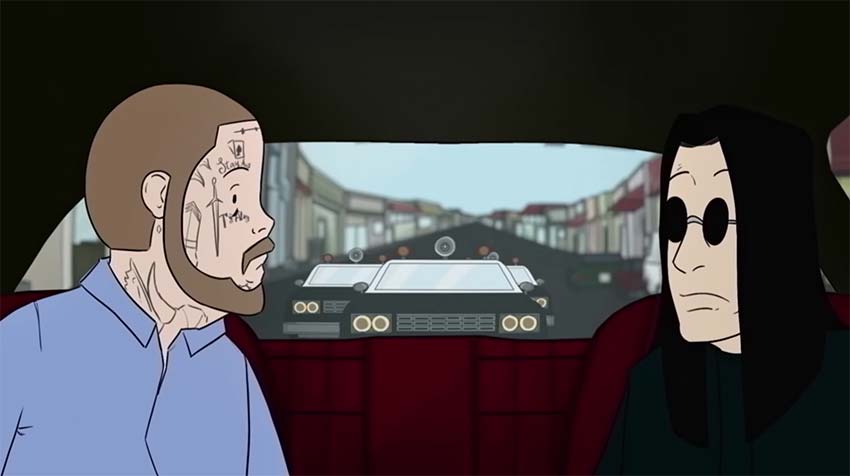 The Prince of Darkness, Ozzy Osbourne and rap/pop sensation Post Malone have premiered an official animated music video for their track together titled “It’s A Raid” — watch below.

“At a SiriusXM listening party last year to celebrate the release of ORDINARY MAN (Epic Records) OZZY recounted the song’s inspiration,” states a press release. “While recording Black Sabbath’s VOL. 4 in Bel Air, California, OSBOURNE triggered the home’s security alarm and police surrounded the home, which he says had “piles of marijuana and cocaine.” OSBOURNE adds, “I’m shouting, ‘IT’S A FUCKIN’ RAIIIIID,” before hiding the drugs and ingesting cocaine while hiding in one of the home’s bathrooms”.”

The clip reveal continues to state, “In the video, directed by Tomas Lenert, OZZY and Post Malone team up for a truly wild ride. The clip begins with OSBOURNE and Malone at the infamous Bel Air, CA house (which served as the inspiration for the song) before they lead police through the streets of the city and passing iconic Los Angeles landmarks on their journey.”

“A couple of years ago I didn’t even know who Post Malone was,” Ozzy declares. “Since then we’ve worked together on two studio tracks and have performed together twice. Understandably Covid-19 made it difficult to get together to shoot a music video for ‘It’s a Raid’ so we opted for this wildly imagined animated video for the final single from the ORDINARY MAN album.”

Osbourne, who’s been in the studio working on a new record with producer Andrew Watt, commented that he “can’t wait for everyone to hear my new music.”

The presser ends with, “This marks the second duet with Malone. The two previously teamed on “Take What You Want” from his Hollywood’s Bleeding album (which they also performed at last year’s “American Music Awards”). The track was produced by Watt, who collaborated with OSBOURNE for ORDINARY MAN as both producer and co-writer.”