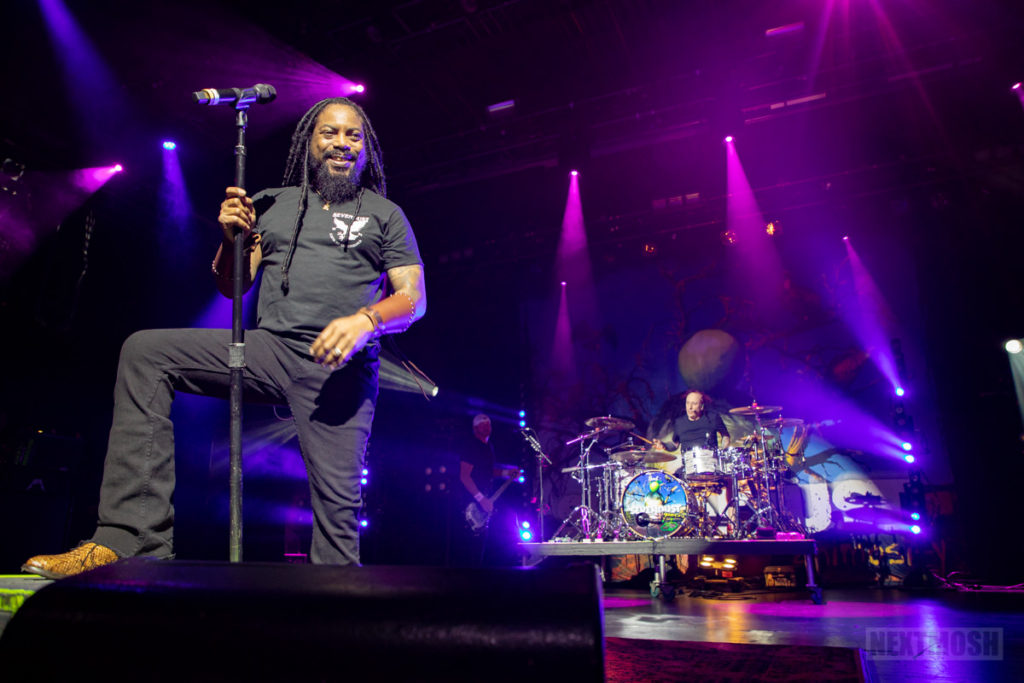 Atlanta, Georgia rock/metal greats Sevendust recently completed the third leg of their ‘Animosity Tour,’ which saw the quintet dish out a full performance of their third studio album ‘Animosity,’ along with a handful of fan-favorites, in a slew of U.S. markets. The outing saw direct support from Fort Lauderdale, Florida powerhouse Nonpoint, along with opening support from Bastardane and Burden of the Sky.

The trek landed in New York City at the Palladium Times Square on September 15th, and as promised, Sevendust pulled out all 13 tracks off ‘Animosity’ during their stay in the Big Apple. The band kicked off their set with “T.O.A.B.” and continued with heavy-hitting numbers “Praise” and “Trust,” before jumping straight into “Xmas Day.” “It’s a pleasure to be back in this setting together,” said lead vocalist Lajon Witherspoon, noting that the band hadn’t played NYC proper in a few years. “Thank you guys for making time to come out in the middle of f**king Times Square,” he continued, as cheers and metal horns filled the air.

Sevendust would continue to perform tracks “Shine,” “Live Again,” “Angel’s Son” and more before ending their main set with “Crucified.” Following a brief break, the band returned to the stage for an encore, causing a circle pit with their hit “Pieces” off of 2005’s ‘Next.’ “Face to Face” from 2003’s ‘Seasons’ ended the evening, with the band tossing guitar picks, drum sticks, and setlists into the audience, and thanking fans for their hospitality.

Nonpoint played a crushing set as well, showcasing high-flying moves while playing popular tunes like “What a Day” and “Bullet with a Name.” The band also highlighted a few of their newer songs like “Dodge Your Destiny” and “Paper Tigers.”

Check out photos by Johnny Perilla from the NYC show via the gallery below.

Next up for Sevendust and Nonpoint, the band will pair up with Ill Niño and Another Day Dawns for a string of Midwest shows at the end of December. Get more info here.

Burden of the Sky: