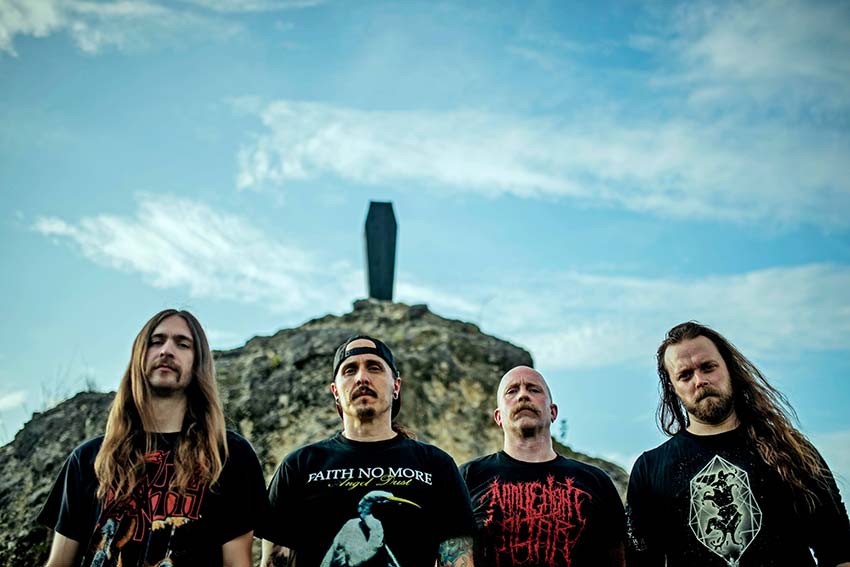 Tampa, Florida melodic death metallers The Absence (Inhuman Condition, Soulfly, Venom Inc.) have released their new single “Coffinized” in official music video form — check out the clip below. The song hails from the act’s impending new record of the same name, which releases through M-Theory Audio on June 25, 2021 (pre-order + get the CD and limited-edition vinyl variants here).

Vocalist Jamie Stewart comments, “We have all been Coffinized at one point or another – confined by a distant, funerary outlook; trapped in a dark, shrinking bubble. As one awaits a lingering exhale, it calls out – a seeping, miserable existence, disguised. Such horrors, hidden in debased, mental escape. You wrap yourself in it as it follows you down, further and further, engulfed by your own disgust and inability; it’s suffocating gaze collapsing in, embalming into your being. You become a living casket for all of your own bitter frustrations – nailed in and buried alive.”

A presser adds, ““Coffinized” is THE ABSENCE’s follow-up to their 2018 comeback record, “A Gift For The Obsessed.” That album was the band’s first in eight years, as well as their first for new label home M-Theory Audio. The time period between that album’s release and the COVID outbreak saw the band stay busy by taking their new songs to the road, touring alongside acts such as Deicide, Origin, Jungle Rot, Exmortus, and Hatchet. Band members also stayed busy with other outside endeavors, with drummer Jeramie Kling manning the kit for Venom Inc., bassist Mike Leon on bass duties with Soulfly and Cavalera Conspiracy, and guitarist Taylor Nordberg playing with Massacre. Those three band members took the experiences from those touring gigs and reconvened in the studio with Stewart who has also been busy with his other project, Hot Graves, to put together the 11 tracks of pummeling death metal that compose “Coffinized.””