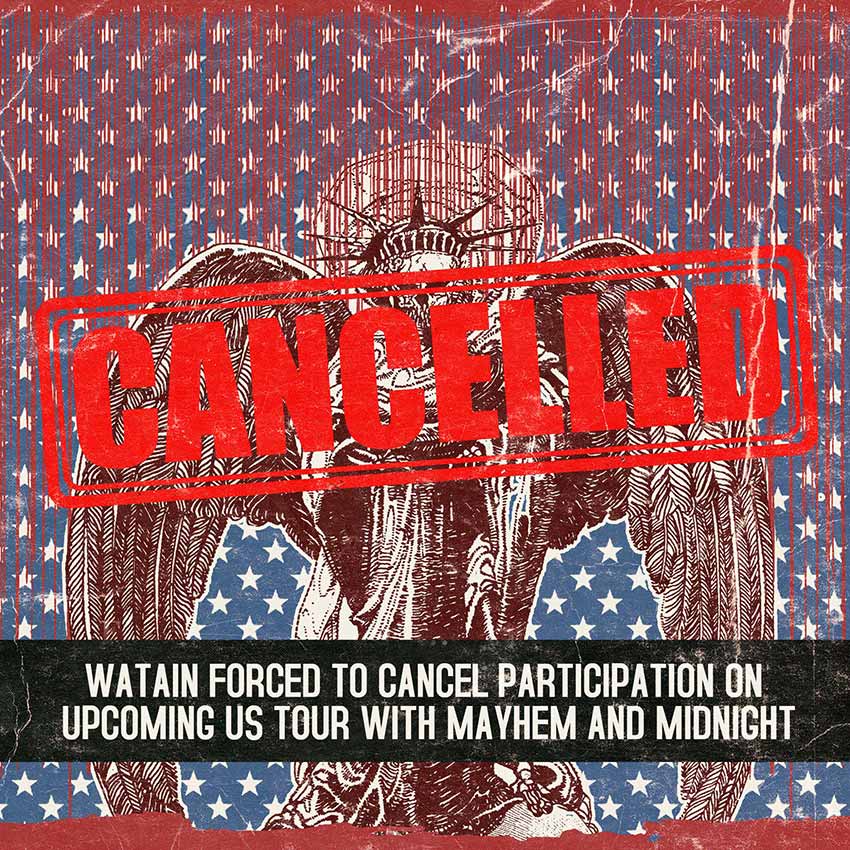 Swedish black metal band Watain have been forced to drop off the planned Mayhem and Midnight North American tour, which is set to kick off March 7th in San Francisco, CA at The Regency Ballroom. Visa issues are to blame for Watain’s absence on the run.

“We regret to inform you all that, due to reasons entirely beyond our control, we’re forced to cancel our participation in the upcoming US Tour with Mayhem and Midnight, for which we were due to leave tomorrow.

We have just been informed that the US Embassy have decided to launch an additional, undisclosed “administrative process” in relation to Watain’s visa applications. We’ve been told that this investigation could go on for months and that we might not get a reply until the tour is over. Since we have not been given any additional information about why this is taking place, how long it’ll take, or if visas will eventually be approved, it leaves us with no choice but to pull out of the tour.

The same embassy has previously approved our working visa applications for every US tour, each of the 8 times we have applied.

Preparing for a tour like this takes an enormous amount of work by the band and our crew. The merch has been produced, ticket buyers have made plans, and the crew relies on the jobs that the tour provides. It is a devastating blow to any band, but to the authorities in charge it seems to hold no significance.

To our loyal fans and followers; we had truly been looking forward to stand before you all again. We invested all we had for this one.

We are working hard on setting things straight and our intention is to re-schedule the North American dates for early 2023. Refunds are available at point of purchase.

Finally, we wish Mayhem and Midnight a killer tour regardless.

In more news, Watain recently announced their new album titled ‘The Agony & Ecstasy of Watain,’ which comes out on April 29th, 2022 through Nuclear Blast Records (pre-order). If you haven’t already, check out new singles “The Howling” and “Serimosa” below.