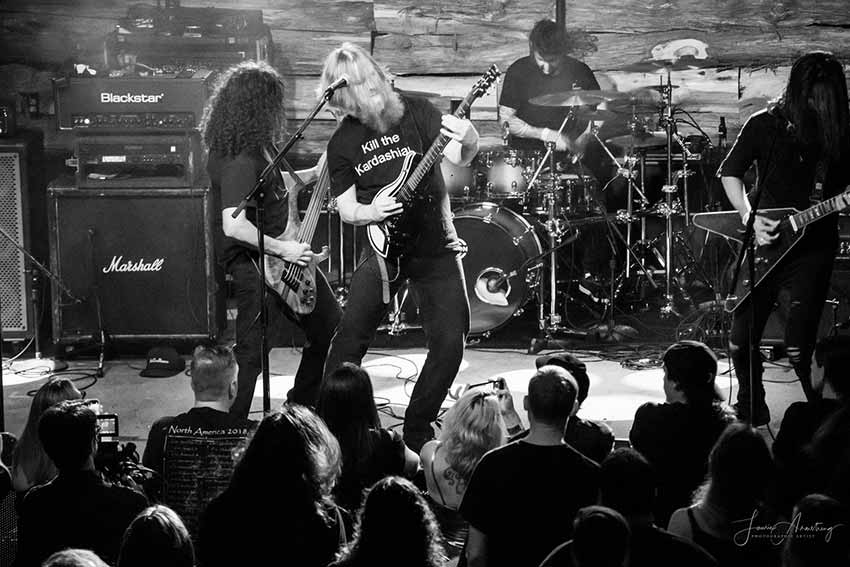 Power fivesome A Good Rogering recently released their new single “Face Value” via streaming platforms, and are getting ready to unleash a new album later this year (stay tuned for more info on that).

Today (and continuing with our ongoing column), the gang have kindly curated and shared with us a Spotify playlist consisting of tunes from Faith No More, Alice In Chains, Megadeth, Guns N’ Roses, Ozzy Osbourne, Black Label Society, Type O Negative and more. The tracks are streamable here and below.

Vocalist and guitarist Skunk Manhattan comments, “For this playlist I included tracks from some of my all time favorite artists along with my band’s (A Good Rogering) latest double single, “Face Value… Systematic Paralysis”. This is the first release from of our upcoming album, and every band on this playlist has been a huge influence and can most likely be heard spread across our tunes. Most of these bands I’ve been into for years, more or less from the time I discovered Guns N’ Roses’ Appetite for Destruction and knew I wanted to play guitar and be in a band. To this day Slash is one of my favorite guitarists and I could have easily picked practically anything from Appetite or the Illusion albums, but instead went with a song from Chinese Democracy. In my option “If The Word” should have been a single; it’s got a fantastic melody and guitar solo from Buckethead. In general I tried to avoid the mega hits, but didn’t necessarily go into the land of deep cuts either. Either way, I pretty much recommend the entire catalog of any of these bands…”

Skunk adds, “Faith No More’s “Absolute Zero” was a B Side, but I think it’s an exceptional track and would have personally made it track one on their King for a Day.. album. “We Die Young” is one of the greatest intros to a band ever, and like FNM, Alice In Chains is one of my all time favorites. I love Megadeth and all the classic early 90s stuff but decided to go with a killer lesser known track off the Cryptic Writings album. Ozzy and Zakk Wylde, enough said! I went with a Type O cover, but I love nearly all of their original music. They were a great blend of classic rock, metal, punk and “goth” with a healthy dose of satire. It’s a shame we lost Peter Steele so young. The Blast Tyrant album introduced me to Clutch and I’ve been a huge fan ever since. And of course, since I’m from Texas, I had to include Pantera. RIP to two of the all time greats, Dime and Vinnie.”

Also Check Out: Trumbiten share their playlist (Lamb of God, The Haunted, In Flames)