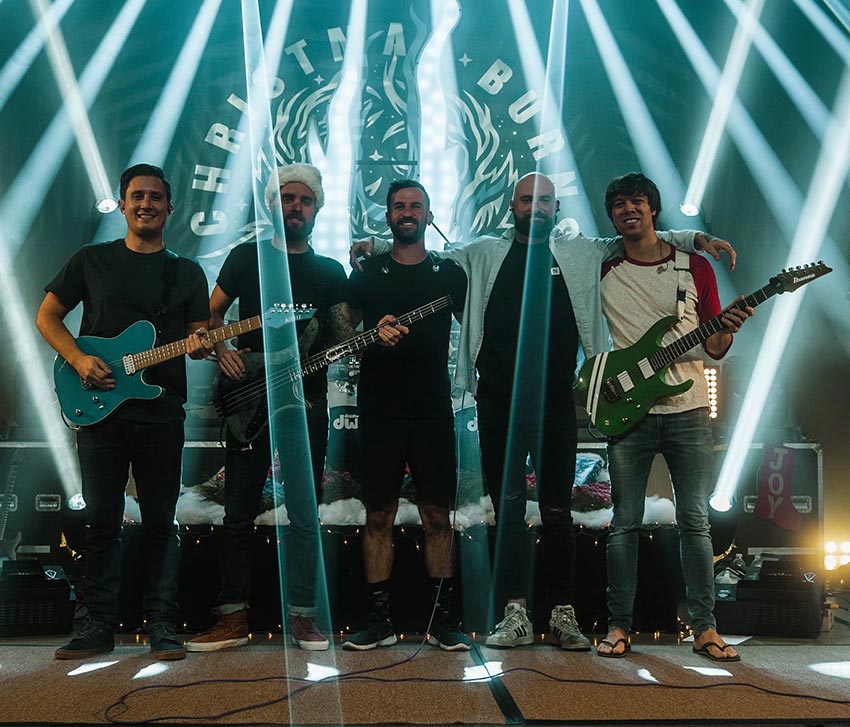 Jingle Bells, Death Metal Hells, Christmas Burns Red destroyed my office chair and probably pissed off my roommate. That’s right, the August Burns Red: Christmas Burns Red live stream event came and went on Saturday, but it helped me destroy my bedroom. With breakdowns like theirs, they can get anyone head banging, and they brought it. Plus, on top of such a powerful setlist, I gotta say, the sound was incredible. You got to give it up to the crews that help put these live stream experiences together. They nailed it. The sound was amazing. I mean seriously they killed the audio on this show. Singer Jake Luhrs’ vocals were also top notch!

The night started off with Bubba Wallace, American race car driver, reading a pretty poetic tale about the band, in the tune of “Twas The Night Before Christmas.” It’s always nice to see who enjoys some good metal music. Probably jammin’ out while making those laps. I could see myself slammin’ the pedal to the metal to ABR. Especially the new Christmas album; I’ve probably listened to it over 100 times since it’s been out. If you haven’t checked it out, I highly recommend it; their rendition of the ‘Home Alone Theme’ song is bonkers. During the show they actually played one of my favorite tracks off the album, “Winter Wilderness.” That got me out of my chair and swiggin’ whiskey.

Before the show began, earlier in the day, the band let all their fans know they would be debuting a new song. Everyone in the chat was super eager to find out what it would be. Well, in the great ABR tradition of playing System of a Down’s “Chop Suey,” they decided to record their own bad ass version. I’m actually surprised I haven’t seen it drop on streaming platforms yet. Can’t wait to get my hands on that.

The show brought the Christmas cheer right off the bat with a poem, a new song, and a set designed for a Mall Santa greeting children. Now, they didn’t play “Chop Suey” live, it was just a recording, but once that ended they jumped right into “Flurries” off their 2012 ‘Sleddin’ Hill, A Holiday Album.’ Followed by a ton of great songs that spanned the vast ABR catalog, from ‘Guardians’ to ‘Rescue & Restore’ and back. They actually only played three Christmas songs I believe, and I personally wanted more. The chat was super pumped when the band played “Bloodletter” for the first time. Jake even stated that this was the heaviest song they ever wrote. My only problem here was I wanted to turn it up louder and I just couldn’t without having the police show up. The show was awesome from top to bottom so I even watched it again.

The show started to wrap up but there was something missing. Matt Greiner’s 2020 Quarantine Drum SOLO! And here it was. I never saw a drummer smile as much as Matt did this night. He was thrilled and so were his legs. They didn’t stop moving. Legs of steel. It may not have been the craziest solo I’ve ever seen but it was very enjoyable.

The band came back on to finish off two more songs. Except this time, bassist Dustin Davidson was in a full santa attire which I was waiting for all night. It was very pleasing, almost as pleasing as watching a band be able to constantly switch instruments with each other. Great show, great band, a ton of fun for their fans. Also, this show sets the bar pretty high for what a live stream should look and sound.

As of this posting, it has been announced that Christmas Burns Red will be on demand at abrlivestream.com until January 1st!