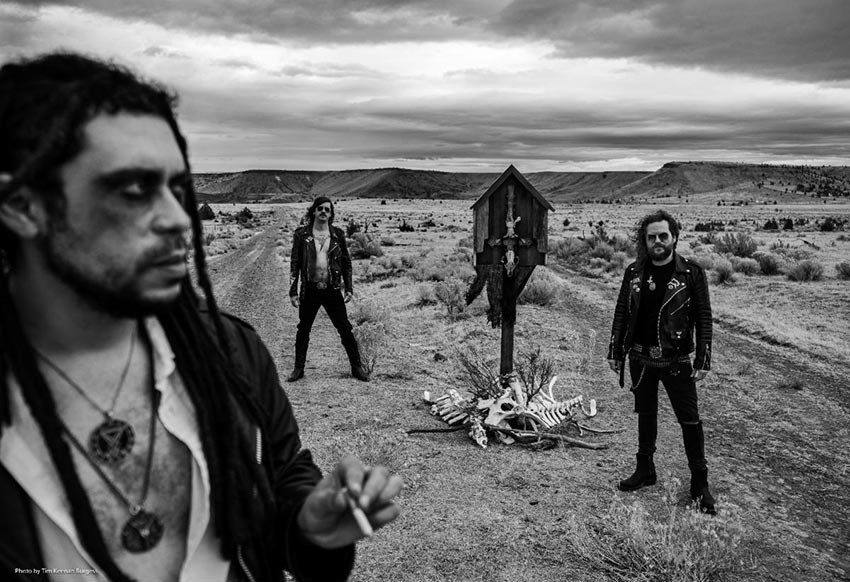 Bewitcher have posted an official music video for their song “Mystifier (White Night City)” — watch the clip below. The track appears on the act’s upcoming third studio album titled ‘Cursed Be Thy Kingdom’ (due out April 16th via Century Media – pre-order). The vinyl version of said new effort will be available on May 14th.

Vocalist/guitarist M. von Bewitcher comments, “Abundant with NWOBHM inspiration, colorful guitar work, and lyrics steeped in historical legend, this track sees the band adding some melody to the mysticism. Dark forces rise when an imposing figure in black with a taste for wine and women comes to power. And when he falls, he brings the world around him down as well…”

“Recorded at The Captain’s Quarters in Ventura, California by Armand John Anthony (Night Demon), and mixed by Cameron Webb (Motörhead, Megadeth), Cursed Be Thy Kingdom is a powerhouse, heavy metal x rock ‘n’ roll record forged in the white hot fires of hell. The cover was done by Paolo Girardi (Power Trip).

Rock ‘n’ roll is the devil’s music, and through Cursed Be Thy Kingdom, Bewitcher invite you to join them at the crossroads, to drink from the chalice of rock ‘n’ roll, and then ritualistically sell your soul to the dark lord himself. M. von Bewitcher puts it best: “The devil is always ready to make the deal…””