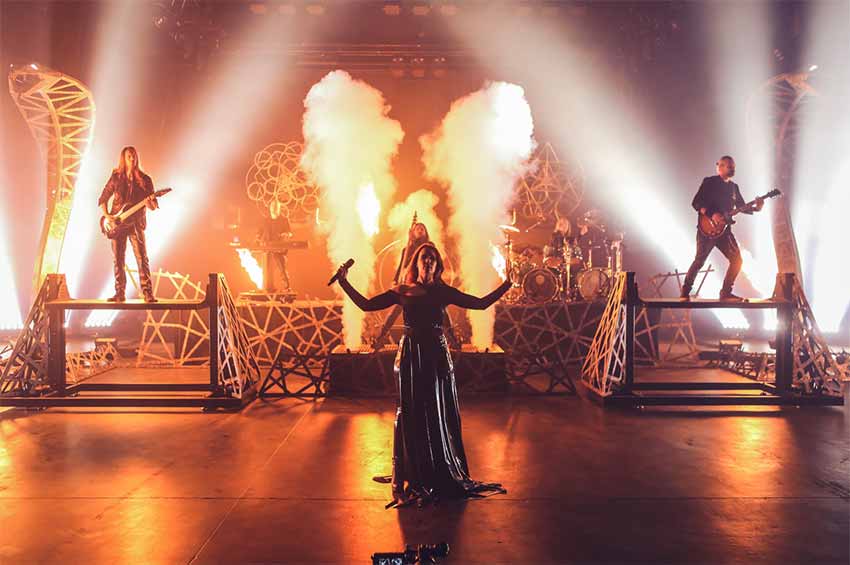 “17 months without playing. 17 months without doing what we love most…” – while being struck by the same fate as every other band on this planet, Epica seized the chance to create a massive concept for a streaming event that should go down in the books as one of the most ambitious shows in the era of the pandemic. With ‘Ωmega Alive,’ Epica played the show of your wildest dreams, brought to life by 75 artists and crew members – think Marvel meeting Cirque de Soleil in a Tim Burton universe!

Soon to be available on various audiovisual formats on December 3rd, ‘Ωmega Alive’ is more than just a live performance from the Dutch symphonic metal titans, and contains spectacular pyro effects, rain on stage, dancers, choirs, and actors, as you can witness in the band’s second live video from the show. Watch “The Skeleton Key” off their latest studio opus Ωmega being performed live for the first time ever here:

Download or stream the song here: [LINK]
Pre-order the BluRay/DVD, 2CD, Earbooks or Boxset via this link: [LINK]

On the weekend that Ωmega Alive sees the light of day, the band will play two intimate release shows in their home country:
03/12/ NL Dordrecht – Bibelot (sold out)
04/12/ NL Eindhoven – Effenaar (sold out)

In case you missed the spectacular fireplay of “Unchain Utopia – Ωmega Alive -“, check it out here: [LINK]

Directed by Jens de Vos (Panda Productions) and graced by a magical artwork by Heilemania, the DVD, BluRay, CD, and vinyl contain 15 Epica classics, fan-favorites, as well as first-ever live performances from tracks off the band’s latest chef-d’oeuvre ‘Ωmega,’ such as “The Skeleton Key” or the insanely monumental “Kingdom of Heaven Part 3”.

Since forming in 2002, the band has amassed an incredible amount of success, their current album ‘Ωmega’ entered the album Top 10 in Germany, Holland, Belgium, and Switzerland. Epica has toured the globe, performing at venerable festivals including Wacken, Hellfest, Heaven & Hell Festival, Heavy MTL, and Download, while also staging shows in countries where many metal bands have not played including South Korea, South Africa, and Venezuela.