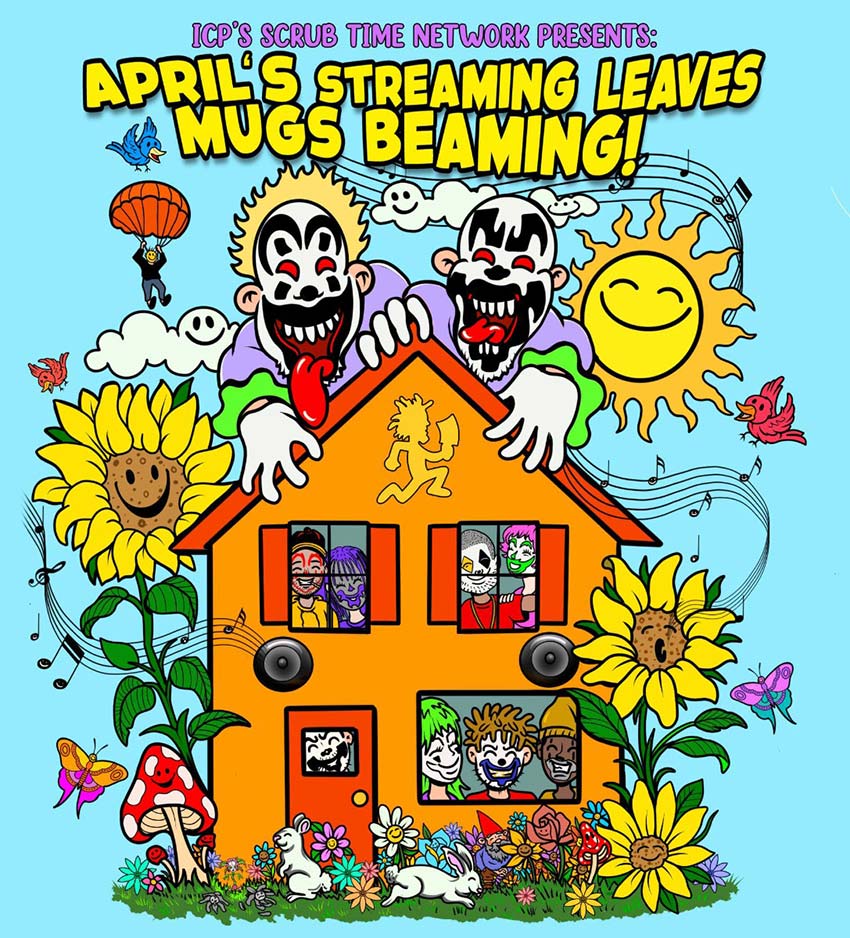 See full info below via an official press release.

Your wig is going to flip off your dome piece during ICP’s live streaming spectacle being shown during the entire month of April!

If you subscribe, you will be able to watch 3 different live streaming shows a week (9pm to midnight) hosted by none other than the Insane Clown Posse! Along with the schedule of shows for April (presented below) is an incredibly special concert taking place on April 30th that is the 2nd official event of the Ultra Live Monster 5 Concert Series! This means if you are a subscriber in April, you will also receive the 2nd of five Ultra Live Monster 5 coins (to learn more about the coins click HERE). But there is more! Subscribers will also receive Fearless Fred Fury: The Furious Edition CD set, featuring Fearless Fred Fury, Flip the Rat & A Time of Fury (an album containing rare ICP songs released during the FFF era). All CDs will come in one case featuring a special FFF alternative cover provided by the masterful art of Tom Wood!

HOW DO I SUBSCRIBE?
To subscribe to April’s Streamin Leaves Mugs Beamin for the entire month of April, go HERE and click on Subscribe. Then simply follow the instructions that will guide you through the steps. There is a one-time cost of $66.50 for the entire month-long subscription. If you are already a subscriber then you don’t have to do jack shit as your subscription will automatically renew at the start of April. Also, if you subscribe not only will you be able to watch all the new shows coming up in April, but you will also be able to watch all the past shows from October, December, and February!

CAN I ATTEND ANY OF THESE SHOWS IN PERSON?
Yes, although tickets are EXTREMELY limited. To find out what shows you can attend in person, check out the schedule of shows below. If you see “IN-PERSON TICKETS AVAILABLE” below the title of a show, then you can purchase tickets. To do so, go HERE, where auctions will be held for the available tickets during the dates and times listed below. Keep in mind that all shows attended in person will be in or near Farmington Hills, MI. Information pertaining to all in-person shows will be sent out to auction winners shortly after the auction is finished.

SCHEDULE OF SHOWS:
MONDAY, 4/5:
WELCOME TO THE JAM EXAM PART 2:
Join ICP as they further explore their extensive music catalog, as they reveal their favorite songs from all the EP’s they have released throughout the years, starting with their earliest; Dog Beats and continuing in order with Beverly Kills 50187, A Carnival Christmas, Fuck Off, Terror Wheel and beyond! They will not only discuss the creative process behind each song but also its in-depth meaning.

WEDNESDAY, 4/7:
BRUCE BROTHERS UNEXPLAINED PHENOMENON:
There are weird unexplained creatures and forces that have leaked into our world from other dimensions, spiritual realms, or even outer space. Some are forces that seem to be observing our world with cold calculating alien eyes while others are malevolent demons who sometimes feast on mortal flesh. Join the Bruce Brothers along with their somewhat skeptical cohost Shaggy, as they explore this depth of strange otherworldly phenomenon while sharing video evidence that will make anyone a believer.

SATURDAY, 4/10:
JCW PRESENTS: FENCED IN FURY AT THE FOLSOM FELONY FUNHOUSE:
Get ready for a bloody spectacle taking place within the Folsom Felony Funhouse Penitentiary! This event promises to showcase the most hard-core imprisoned wrestlers that JCW has to offer, as they battle it out within a steel cage using barbed wire bats, thumbtacks, flaming fists, stapleguns, foreign objects, glass, and much more. With live commentary being provided by ICP, you will laugh until you cry, as your sanity slips away from witnessing all the blood-soaked brutality firsthand!

MONDAY, 4/12:
THE DOOMSDAY COUNTDOWN PODCAST :
With the Doomsday Clock currently set at 100 seconds to midnight, scientists foreshadow that the world is the closest to destruction than it has ever been in recorded history. What better time for ICP & Jumpsteady to discuss the top 10 ways that humanity would most likely be wiped out! Being filmed in Psychopathic’s secret underground fallout shelter will ensure we will continue to broadcast even if the world does come to an end during the show.

WEDNESDAY, 4/14:
THE NEDEN GAME:
This dating game-style show which has been popularized by being showcased at each Gathering is a Juggalo tried and true favorite. Join your gameshow hosts ICP, as they help the bachelors and bachelorettes find a date from a selection of would-be suitors that they are not allowed to see. They are however encouraged to ask them a bunch of revealing, often R-rated questions to make their decision easier. Then watch the winners struggle through their date as they enjoy dinner at Duck Mouth’s Ding-A-Wing House which only serves two types of chicken wings: hot or not.
Those wishing to compete and who can make it to Farmington Hills, MI on APR 14th please write to SCRUBTIMENETWORK@GMAIL.COM ASAP and leave your name and number and someone will contact you.

FRIDAY, 4/16:
BIG SILVA vs EVERYTHING! CRASH AND SMASH CHAMPIONSHIPS!:
Get ready for ultimate destruction done on a large scale! The indestructible gigantic wrecking ball known as Big Silva, who is made up of 100% duct tape, will go toe-to-toe with impressively large objects in this free fall championship to see who will come out on top! In each round, two will enter the arena of death but only one will leave! Half the show will be live, with the other half featuring prerecorded footage of more spectacular drops that were too dangerous to be filmed in front of a live crowd. We have also brought in a special high-speed camera so you can see the destructive replay in all its slow-motion glory!

MONDAY, 4/19:
THE MAD PROFESSORS LAB:
Join the mad professors, ICP & Jumpsteady in their demented lab, as they conduct dangerous scientific experiments that will be visually stunning and explosive! Witness the miracles of science before your very eyes from the safety of your own home as volatile and powerful chemicals are combined for your wig flipping entertainment!

WEDNESDAY, 4/21:
ICP’S GREAT ESCAPE PART 2:
ICP along with their homie Ouija Macc will once again put their ninja skills to the test when they are put to the challenge as they try to survive two new Escape Rooms that are set up in an official Escape Room facility! Can they overcome all the puzzles, traps, and obstacles and make it out of each room in an hour or less, or will they meet a grizzly fate? Help them if you can, because they will be asking the online Juggalo audience for help during this difficult challenge.

SATURDAY, 4/24:
MISS JUGGALETTE 2021 PAGEANT:
(IN PERSON TICKETS AVAILABLE / Ticket Auction runs APR 10th at 9pm to APR 11th at 9pm)
There is no other Juggalo competition more prestigious or anticipated than the Miss Juggalette Pageant that has been a Gathering tradition for the past 20 years. It is here that we get to pay homage to the beauty, intelligence, and charm of all our wonderful Juggalettes. Sit alongside ICP & Ouija Macc as they judge the three rounds of competition (Personality, Talent, and Swimsuit) to present the top 3 winners (who will all win 2 tickets to the concert on the 30th). At which point the viewers at home will get to vote to determine the 1st place winner who will also receive the coveted Gold Plaque, $300, and the esteemed title of Miss Juggalette 2021!
Those wishing to compete and who can make it to Farmington Hills, MI on APR 24th please write to SCRUBTIMENETWORK@GMAIL.COM ASAP and leave your name and number and someone will contact you. Every contestant will be allowed to bring one person with them.

MONDAY, 4/26:
SLIDESHOW SPECTACULAR PART 2:
Back by popular demand, ICP & Jumpsteady will be shown a plethora of random, never-before-seen photos taken from the Psychopathic vaults, so they may discuss the story behind each one. This is a rare opportunity to get insight into the behind-the-scenes flavor that took place throughout ICP’s entire career. Don’t miss this rare opportunity!

Also Check Out: From Ashes To New announce May live stream