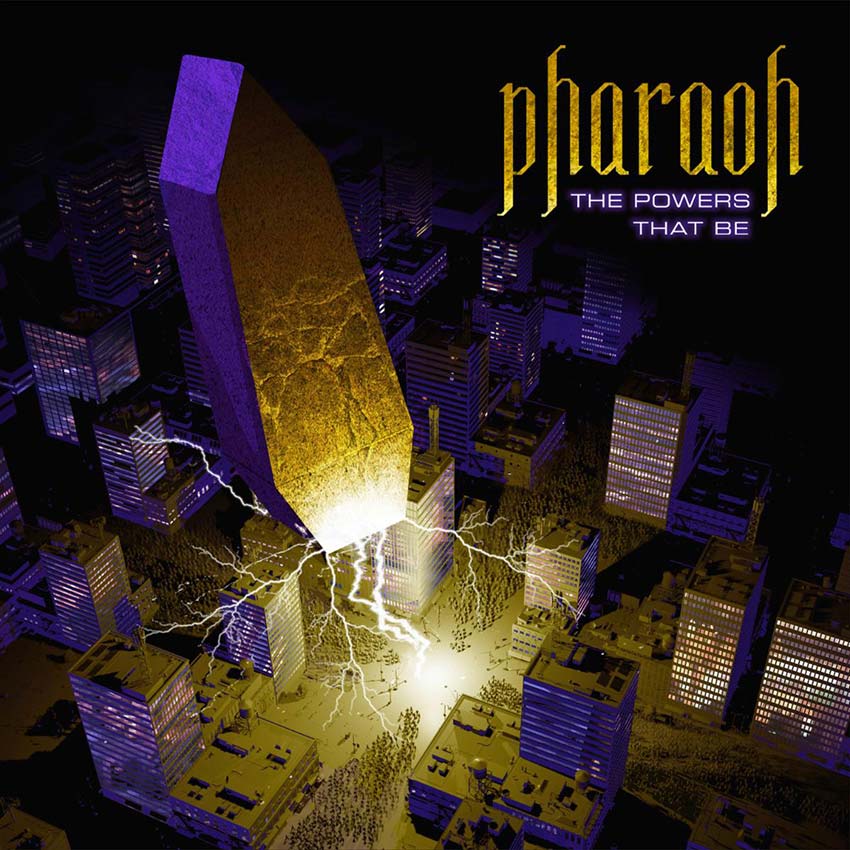 The wait is over! Pharaoh returns with their first album in nine years, ‘The Powers That Be’! The album will be released June 18 on Cruz Del Sur Music. Check out the trailer video at [LINK – embedded at the end of this post].

Long-running American metallers Pharaoh emerge with ‘The Powers That Be,’ a nine-song offering of challenging melodic metal featuring a guest solo from Voivod’s Daniel “Chewy” Mongrain!

Nearly 25 years ago, drummer Chris Black (High Spirits) conceived Pharaoh at a party while listening to Saxon. Shortly thereafter, he emailed one his fellow metal ‘zine writers, Matt Johnsen, selling him on the idea. At the time, Black was focused on Dawnbringer; Johnsen was simply excited to be part of an exciting new project. The object was to create a melodic metal band — a certifiably “un-hip” thing circa the late 1990s — that tapped into their deep well of influences. Once Black and Johnsen landed the services of up-and-coming singer Tim Aymar (Control Denied, Psycho Scream) and bassist Chris Kerns, Pharaoh’s permanent lineup was born, embarking on a journey that has produced now five studio albums of unmistakable class and quality, the latest being ‘The Powers That Be.’

The follow-up to 2012’s Bury the Light was recorded exclusively by the members of Pharaoh — Black tracked his drums in Chicago, while Johnsen decided to cut his guitars, Aymar’s vocals and Kerns’ bass at his home studio in Eastern Pennsylvania. However, like most bands, Pharaoh’s scheduling fell victim to the global pandemic. Aymar was able to complete his first vocal session right before the lockdown occurred, but the band had to wait several months to resume recording.

The extra time was worth it, though. ‘The Powers That Be’ is Pharaoh’s most diverse and adventurous effort to date, charting a new, progressive path while maintaining the band’s stylistic traits. Those traits, like they always have, rest heavily upon the spider-web riffing of Johnsen, the air-tight rhythm section of Black and Kerns, and Aymar, whose range and growling rasp continue to make him one of metal’s most identifiable singers. Case in point, “Waiting to Drown,” a song Johnsen calls a “murder ballad” that highlights Aymar’s haunting baritone, as well as “Dying Sun,” where his desperation and fierce resolve emerge as an album highlight.

‘The Powers That Be’ also includes a guest guitar solo from longtime collaborator Jim Dofka (Dofka) on “Ride Us to Hell,” as well as a new face, Voivod’s Daniel “Chewy” Mongrain. Mongrain was a last-minute addition to the album — due to various scheduling conflicts, Pharaoh was approaching the eleventh hour to land a second guest soloist since the album was already tracked. But, once the band made contact with Mongrain, the Canadian guitarist delivered a stunning solo in less than a week for the album’s title track.

The album’s lyrics were written during one of America’s most tumultuous periods in recent memory. The pandemic, coupled with a volatile political situation served as fodder for Pharaoh, who has been tackling matters of politics since 2006’s The Longest Night. Far from preachy, the lyrics on ‘The Powers That Be’ are thoughtful and carry enough depth to where listeners can determine their own meaning. It correlates to the album title — ‘The Powers That Be’ represents the forces that stifle creativity and decency, from the plague of white supremacy to the ravening predation of capitalism.