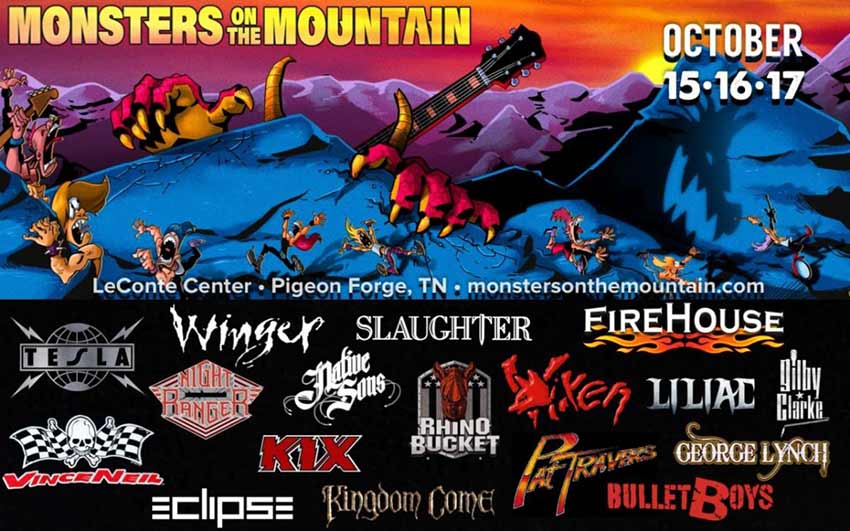 The first ever ‘Monsters on the Mountain’ three-day festival has been announced for October 15, 16 & 17 in Tennessee, and will feature Tesla, Vince Neil (Motley Crüe), Night Ranger, Winger, Kix, Slaughter, Firehouse and much more. Check out full info below from the official press release.

The inaugural Monsters on the Mountain (MOTM), a three-day hard rock music experience brought to you by the creators of the pioneering Monsters of Rock Cruise, has been announced for this October 15th-17th at the LeConte Center at Pigeon Forge in Tennessee’s beautiful Great Smoky Mountains.

This immersive fan and artist celebration will be the first “Monsters” event in almost two years, so attendees will definitely be celebrating MOTM’s theme, You Can Still Rock In America!, as they witness performances from over 20 rock acts, plus an array of interactive events and activities. All ticket holders will not only receive complimentary parking and unlimited access to the performances, but also access to the Rock N’ Roll Vendor Market, Rock N’ Roll Art Gallery, and The Ultimate Tailgate Party, with more to be announced.

The public on-sale kicks off today (6/11) at 12 Noon ET, with three-day packages starting at $265.00 per person (plus ticketing fees and taxes) and individual day tickets also being available. For more info and to purchase tickets, visit MonstersOnTheMountain.com and follow Monsters of Rock Cruise on Facebook, Instagram, and Twitter for updates as well.

Located along the banks of the Little Pigeon River, the LeConte Center at Pigeon Forge is the perfect setting for the inaugural Monsters on the Mountain. The architecture and design of the venue exudes a mountain lodge ambiance that amplifies the serenity of the Great Smoky Mountains. When the design and planning for this impressive event and concert venue began, the name was chosen as a tribute to the building’s spectacular view of Mount LeConte in Great Smoky Mountains National Park. For 60 years, visitors have been returning year-round to Pigeon Forge, TN, as the little mountain town and family-friendly vacation destination is filled with fun activities ─ from thrilling attractions and award-winning shows, to countless options for dining, shopping and lodging.

With a myriad of events, activities, and music to keep fans entertained day and night, Monsters on the Mountain promises to be the biggest event of 2021 for hard rock music enthusiasts.

About Monsters of Rock Cruise and Monsters on the Mountain:
A leader in cruise charter innovation, Monsters of Rock Cruise (MORC) has sailed over 30,000 passengers in the last decade. The principals of MORC have deep roots in the music industry, providing world-class cruise ship production management for celebrities and musical artists for decades. MORC has set the industry standard for themed music cruises and fan experiences and has played a key role in the development of ground-breaking theme cruise concepts. Monsters on the Mountain (MOTM) is the latest spinoff event created exclusively as a three-day, land-based festival with the inaugural program being held in Pigeon Forge, Tennessee on October 15-17, 2021. Click here for exclusive MOTM merch and click here for exclusive MORC merch, including face masks, T-shirts, hats, neck gaiters, and more. For more info, visit MonstersOnTheMountain.com.