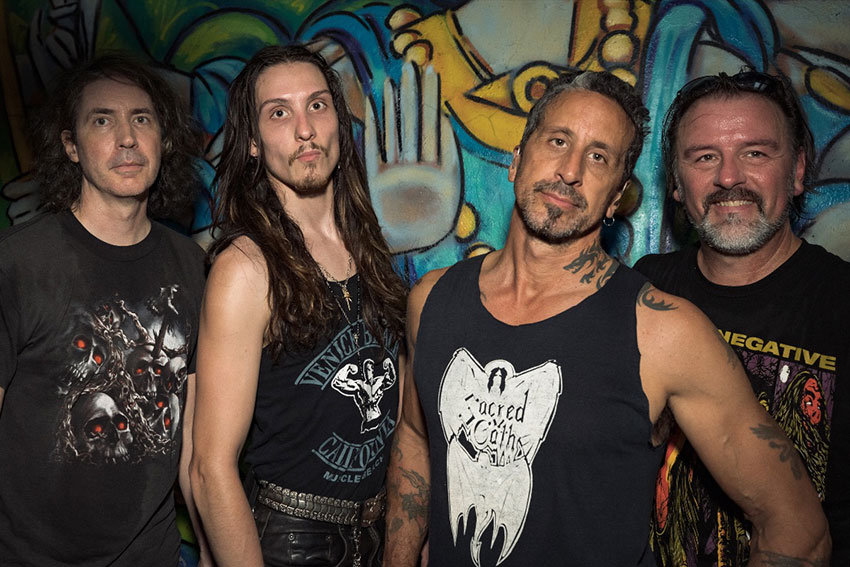 Connecticut-based power/thrash metal outfit Sacred Oath have premiered a new live video for their song “Two Powers.” The clip was recorded live at the band’s ‘A Crystal Vision’ 35 year anniversary celebration show, which took place earlier this year at Sovereign in Brooklyn, NY.

Here’s more info about the performance via a presser, “Sacred Oath joined a reunion of three Mercenary Records bands from the late 80s including Attacker and Meanstreak for the “one night only” event hosted by Armageddon Productions. It was the first performance in more than 30 years for the all-female thrash outfit Meanstreak (currently on tour with John Petrucci) and the first time ever that all three bands shared the stage. The night took a tragic turn when Meanstreak singer Bettina Campagna France took a fall backstage and was unable to perform, much to the disappointment of fans who had traveled from out-of-state to witness the reunion.”

“It was a crazy situation,” said Sacred Oath singer Rob Thorne. “The promoter was waving his arms at me from the side of the stage before the last song on our set list, and I was thinking ‘are you kidding me? You’re going to make us cut the last song when we’ve promised the whole album?’ But he was asking me to keep playing until we ran out of gas because Tina had just been rushed to the ER with a broken arm, so I just kept calling out songs and we worked our way through half of the “Darkness Visible” album as well. The rest of the band had no idea what was going on and they thought for sure a long hook was gonna come out and yank me.”

Check out footage of Sacred Oath performing “Two Powers” by Ignacio Orellana of ProMusicVideo below.