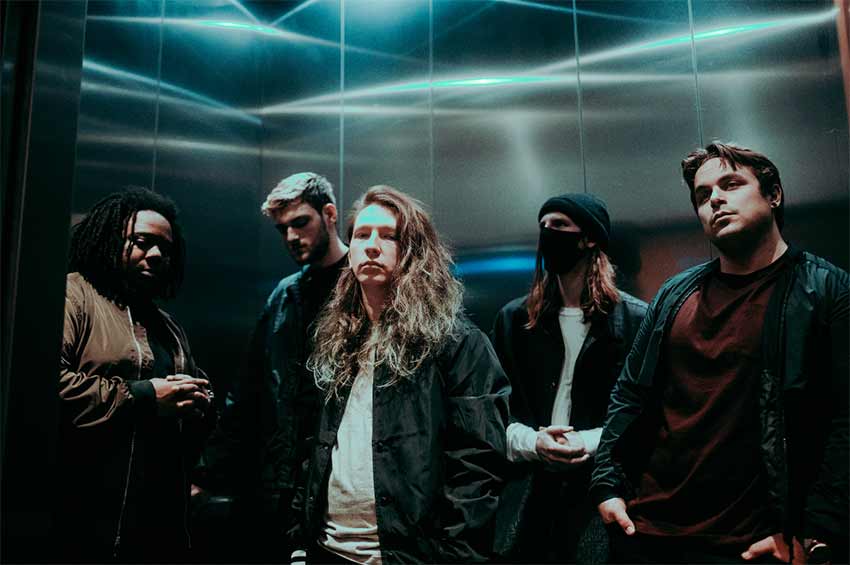 The band has shared the video for the crunchy and mathematical track “110 Minutes.” Watch the visual, which finds the band in performance mode amidst digitized imagery, HERE [embedded below].

“‘110 Minutes’ is one of the most energetic songs on the record, but it still holds the same melancholic theme of change brought from loss,” the band says. “This is a concept we decided to carry over from the new song ‘Distance.’ We felt that making one of the hypest songs on the record connect back into the story our past song, ‘Relief’ [from 2018’s Don’t Look at the Moon], all the while making this song relate sonically to DLATM with heavy, crushing, fast-paced riffs and constant background effects to build atmosphere. We really wanted to highlight that while ‘Alias’ may have more melodic experimentation with songs like ‘Distance’ and Skin,’ a song like ‘110 Minutes’ is a perfect showcase of our signature heavy sound that we’re still developing while perfecting the newer elements.” Sleep Waker previously shared the video for the first single “Distance.” Watch it HERE.

‘Alias,’ which follows the band’s 2017 debut EP ‘Lost in Dreams’ and the 2018-released full-length Don’t Look at the Moon, is the sort of album that asks listeners to examine who we are, how we quantify our reality, and what it means to be alive. Although rooted in many of the same conceptual themes and ideas that gave the band their successful start in 2017, this time they’re diving even deeper. This time, it’s not just conceptual exploration. This time, it’s personal.

In a world of synthetic reality, AR, VR, and simulation theory, questioning whether we’re really awake or just experiencing a construct of reality can no longer be dismissed as a crackpot notion. We don’t yet know enough about the wider universe to definitively answer many of life’s biggest questions. So as the lines between life, art, and experience become ever more blurred, why shouldn’t Sleep Waker blend pop culture with their own personal realities? And yet, in amongst all of these otherworldly sci-fi settings and lofty ideas, you have incredibly heavy, very real, and hard-hitting sentiments.