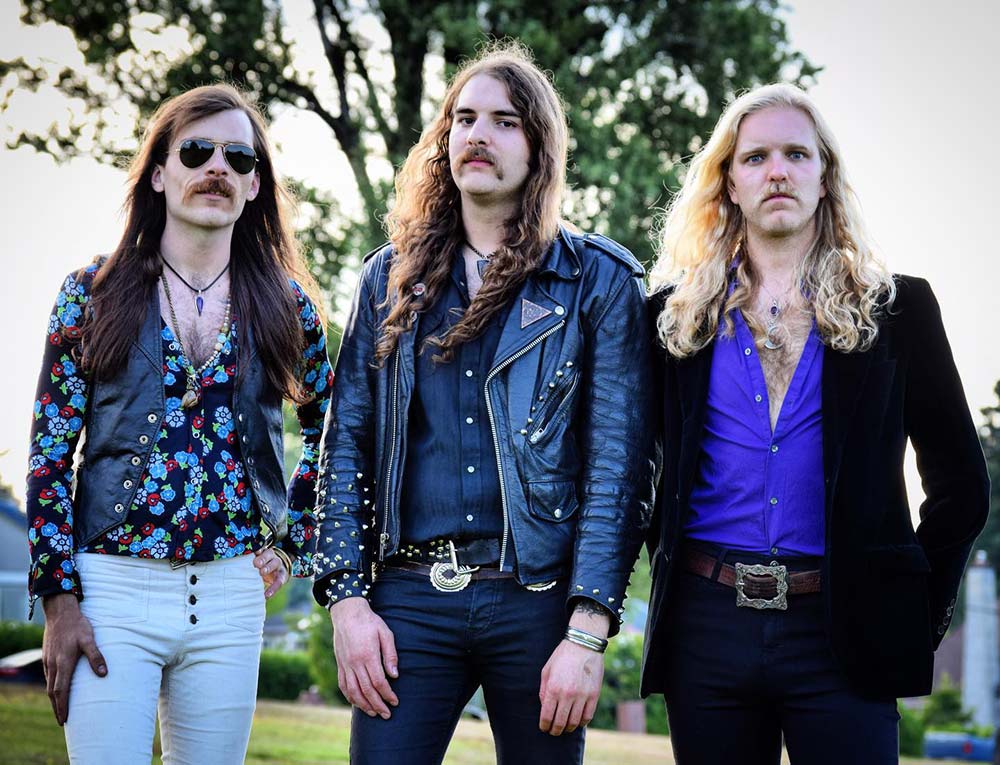 Hailing from Vancouver, British Columbia, yet divining their art from the realm of nocturnal visions and fantasies, Spell have already proven themselves mighty chroniclers of the more supernatural quarters of the heavy music sphere. Recorded at Little Red Sounds studio in New Westminster, B.C., ‘Opulent Decay’ is an emotionally charged psychic travelogue wreathed in mysticism. The album embraces harmonic guitar heraldry while also showcasing a band as adept at essaying a hymnal acapella piece like the beguiling “Ataraxia” as they are the wistful and melancholic “Dawn Wanderer”, the pastoral-tinged and progressively slanted “Primrose Path” or the catchy and barnstorming title-track.

“Many bands find their third album the most difficult because they’re trying to recreate what they’ve already done; for us, it gets easier and better every time,” states Spell bassist / vocalist Cam Mesmer. “As ideas emerged during the writing process, we nurtured them and gave them all the time and care they needed to flourish and bloom.”

A sampling of what ‘Opulent Decay’ holds in store can be experienced now as Spell releases a music video for the LP’s lead track “Psychic Death”. Directed by Sean Edwards of Toronto based film collective Ramble Films, the “Psychic Death” video showcases Spell at the height of its powers. See and hear Spell’s “Psychic Death” now at this location.

“I’ve been close to underground music for most of my life and like to keep my foot in it artistically to help promote the scene and bands I admire so i’m glad I contacted Cam early to try and create something for the release,” says Edwards. “This one was pretty experimental with how it came together based on some themes we had discussed and really brings the song to life, visually.”


Spell’s debut, 2014’s ‘Full Moon Sessions’, and 2017’s critically-celebrated LP, ‘For None And All’, are proof positive of an outfit — completed by drummer and co-vocalist Al Lester and guitarist Graham McVie – whose grasp of diverting dynamics matched their infectious songcraft. However, these were apparently mere preludes to ‘Opulent Decay’, the band’s third and finest record to date.

In addition to the lyrical influence of romantic poets like Keats, Shelley and Coleridge, there’s an underlying concept to ‘Opulent Decay’, as Cam explains: “All of the songs deal with the contrast between opulence and austerity, and the decay that results from imbalance. Our drive to avoid suffering is strong, but it can be overcome by the love for another and the desire to put them before yourself. ‘Opulent Decay’ examines this balance and the dangers that await on either side of the pendulum.”

Divining its art from the realm of nocturnal visions and fantasies, Spell has already proven to be mighty chroniclers of the more supernatural quarters of the heavy music sphere.

“Music, like dreams, exists in feeling rather than explanation,” continues Mesmer. “In sleep, the strangest things can elicit joy or terror — this is why dreams are so difficult to articulate. Creating music, for me, is similar; often, I’ll wake in the dead of night with a powerful feeling or melody in my mind, not connected to reality in any concrete way. I’ll then leap out of bed to try and capture it before it disappears!”

Pre-order ‘Opulent Decay’ at this location.