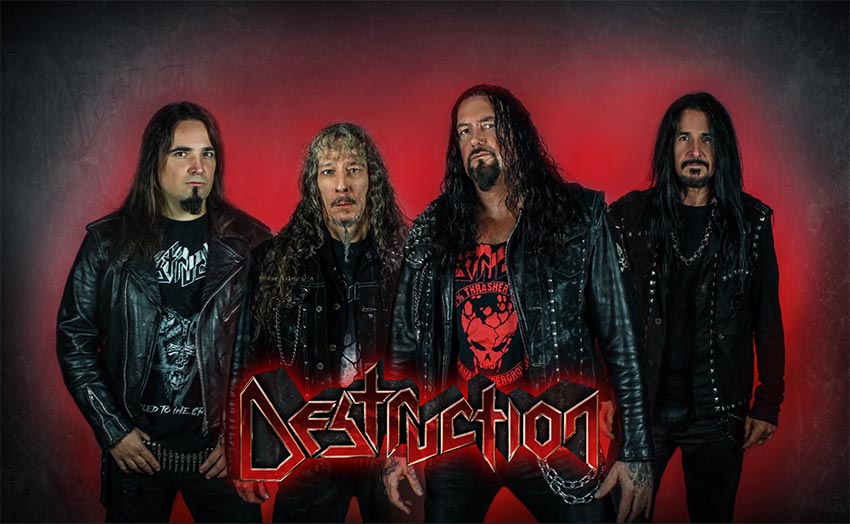 Napalm Records is beyond proud to join forces with Germany’s hottest and most explosive thrash metal engine, DESTRUCTION! The band has signed a worldwide record deal with the premier rock and metal label and is set to release new music later this year.

Since their debut EP, ‘Sentence Of Death’ (1984), the German foursome with legendary founding members Marcel “Schmier” Schirmer on vocals/bass and Michael Sifringer on guitars, DESTRUCTION have turned heads and broken necks with their incredibly honest and uncompromising thrash metal power. Starting as a trio and releasing an imposing amount of records in this constellation, for their latest energizing and most successful, chart-breaking output to date, ‘Born To Perish’ (2019), these pioneering favorites transformed into a quartet to fuel the furious beast with highly energetic riffs and blasting drums even more!

United with insanely talented Randy Black (drums) and Damir Eskić (lead guitars), and teaming up with Napalm Records, DESTRUCTION will embark on the next heavy and always thrashing chapter of a yet impressive career. New exciting things to come very soon – stay tuned!

DESTRUCTION’s Schmier on the signing:
“Well, this decision was a long way coming! We are super excited to join the Napalm family, because I have been a fan of the label and their philosophy for a long time. I’ve followed their impressive history and great work for many years and have recommended Napalm Records to other bands and friends before. So now it was finally time for us to move on and be a part of their roster of fantastic artists. A strong and fresh partner for these crucial years of our career is an important step for us!

We were using the time well to prepare new releases for our faithful fans worldwide, more news about that very soon!”

Napalm Records A&R Sebastian Muench states:
“I am absolutely excited to work with such a legendary band as DESTRUCTION! I watched them play live in Frankfurt when I was 14 years old, and now working together as a team on new album releases is a dream come true! Welcome to the Napalm family!”