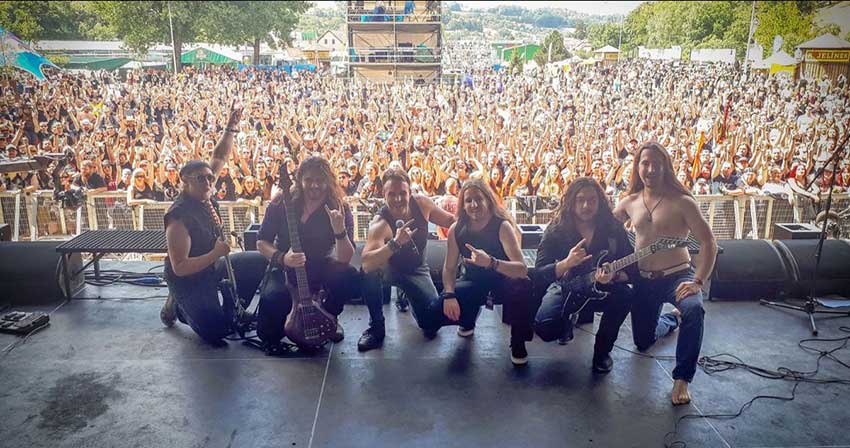 Unstoppable Austrian symphonic power metal heroes Dragony have signed a worldwide record deal with Napalm Records. Eight years have passed since they debuted with their first album Legends, and despite their humble beginnings back in 2007, the band is now a well-known representative of the genre. Owing to their outstanding live performance skills, Dragony quickly arose to share the stage with Blind Guardian, Sonata Arctica, Powerwolf, Van Canto and many others.

After their second release, Shadowplay, the band performed at major European festivals as well as headlining Vienna’s popular Donauinselfest in 2016. Since then, Dragony followed up with two strong releases and reinforced their stance even more. Referencing fantasy-scenarios as well as pop-culture elements, like video games and movies, the Austrians conquered the 70,000 Tons of Metal cruise and the legendary Wacken Open Air in 2019.

But Dragony are far from stalling and will move even further. Napalm Records is proud to join forces with the Austrian powerhouse and is ready to bring symphonic power metal to the next level!

Dragony on the signing:
“Metal is coming home! We are more than thrilled to announce that DRAGONY has signed a new worldwide record deal with Napalm Records!
As an Austrian band, it truly feels almost like a “homecoming” for us to not only work with one of the best labels for metal and rock music in the world today, but one that is also based in Austria. We feel that Napalm Records is the perfect place for our brand of tongue-in-cheek power metal, as the label is also home to many of our favorite acts from the genre.
We are very much looking forward to releasing our upcoming fourth album through Napalm, and we are very thankful and excited about all the possibilities of this new collaboration for the next chapter in DRAGONY history.
We stand – with forces united!
Stay glorious!”