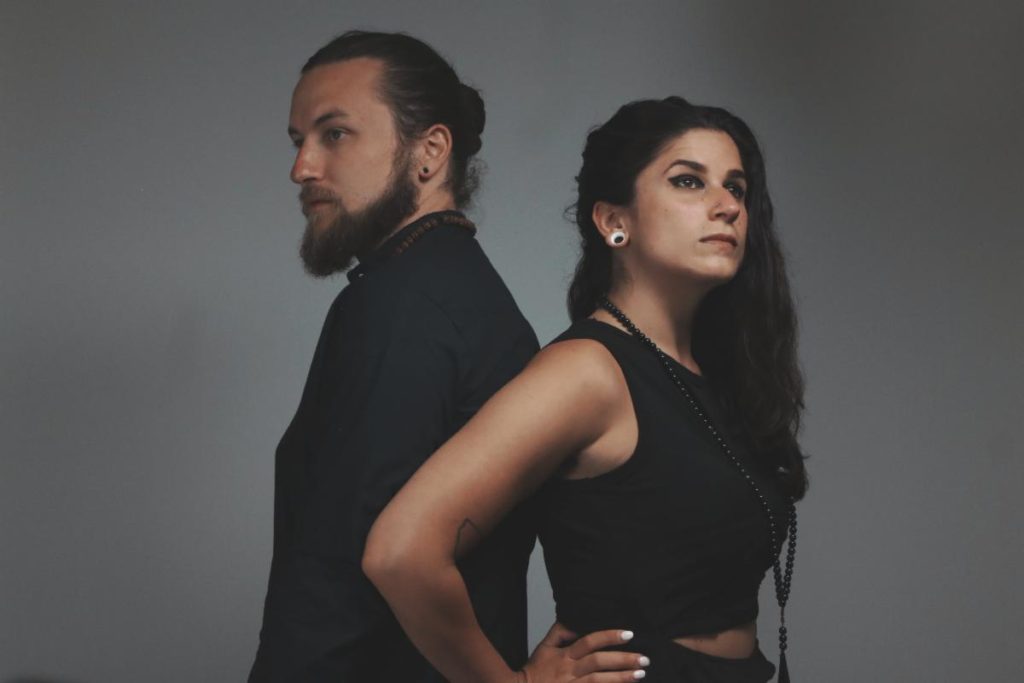 Metal Blade Records is proud to welcome Entheos to its worldwide roster!

Originally formed in 2015, since 2020, the lineup has been stripped down to core founding members drummer Navene Koperweis – who has now also taken on guitar duties – and vocalist Chaney Crabb, and they have never been more vital. Armed with a sound that amalgamates death metal, groove, grunge, electronica, slam, gothic rock, jazz, prog and more, they are a wholly unpredictable beast that has evolved over the course of their career.

Navene Koperweis and Chaney Crabb comment: “We are incredibly excited to announce that we have signed with Metal Blade Records. Metal Blade is a pillar in the metal community and consistently releases music from many of the world’s greatest bands. We are proud to be associated with such a label and look forward to our future working together.”

The progressive death metal genre is a diverse movement, but even within this, Entheos stand out as a unique entity. Taking their name from a Greek word that translates to “the god within”, the band’s philosophy can be drawn from its meaning. “The English word ‘enthusiasm’ is derived from this word. We chose this name originally because of both the enthusiasm that we felt for embarking on this new journey as a band and our collective belief in ‘the god within’ – the idea that reality manifests itself from within us.” Their debut EP Primal was dropped in 2015, first full-length The Infinite Nothing following in 2016, with their most recent release – 2017’s more progressive-oriented Dark Future – being their deepest and darkest record, lyrically influenced by the suicide of a close friend of Crabb’s. In support of these records, the band have toured with the likes of The Black Dahlia Murder, The Dillinger Escape Plan, Veil of Maya, Revocation, The Contortionist, Intronaut, Goatwhore, Between the Buried and Me, Born of Osiris, Rivers of Nihil, Beyond Creation, Conjurer, Iron Reagan and many more, building a steady following and carving out a niche for themselves, but it is only now that they are truly coming into their own.

Hard at work on a new album that explores a broad musical spectrum, they plan to drop their currently untitled full-length in early 2022. The bond between Crabb and Koperweis – which extends into their personal life, having been a couple since before Entheos was even formed – contributes to the uniqueness of the band. “We respect each other greatly – not only as artists, but as people. Our relationship and the mutual passion that we have for Entheos has consistently been the backbone of this band. We share a vision that we are unwilling to compromise – in music, art, live shows and beyond. Having been together romantically for ten years, we are very aware of how to play to each other’s strengths. In the creative process, we don’t just write for the sake of our own voice being heard, but what would complement both of our musical voices and vision. We don’t want anything about this project to be an afterthought, so in the creative and planning stages, it is crucial for us to see it together as a whole and understand how we both fit in.”

They dropped the track “Remember You Are Dust” in 2020 to introduce fans to the new era of the band, with Koperweis taking on guitar duty for the first time, and after its release, dove back into writing the next Entheos full-length. “We took the pandemic as an opportunity to reimagine every aspect of the band and plan on re-emerging stronger and more focused than ever with a new release. With this record, we are pushing beyond the boundaries of what we believe this band is. It is by far the heaviest and fastest record we’ve made, while simultaneously being the most dynamic and diverse showcase of genre-bending musicianship, melody and progressive themes. We are also more focused than ever on vocal performance, and Chaney will be incorporating pitched screaming and singing along with a more diverse metal vocal range.” Confident as they are, at this stage in the game, they feel that they have something to prove. “Six years, two albums and many tours later, it is just the two of us, and we want to prove that the heart and soul of Entheos is not only far from gone, but that in this iteration, we can still deliver the best and most passionate release that we have created.”

Stay tuned for Entheos’ upcoming album – and Metal Blade Records debut – coming in 2022. In the meantime, fans can watch a new teaser video from Navene Koperweis and Chaney Crabb now at: